“It’s a great spot to be in going into Day 2 as the overall chip leader. However, we all know poker variance and how things can change in a couple of hands. My plan is just to play good poker and accumulate all the chips by the end of the day.”

With the elimination of Jeungu Seo, Day 1C is completed, and the top 55 players have made their way to Day 2, which will take place tomorrow. Among the 55 survivors are seven Indians, out of which three players, namely Siddhanth Kripalani, Abhinav Iyer and Zarvan Tumboli, are among the top 10 stacks of the day. Other players who have also qualified are Akshay Kapoor, Gaurav Sood, Avneesh Munjal and Sumit Sapra. Day 2 of the Main Event will see banker turned poker pro Kunal Patni kick-start the day as chip lead with a stack of 708,000 chips at his disposal to fight for the top spot. It would be interesting to see if Patni maintains his dominant position throughout Day 2. 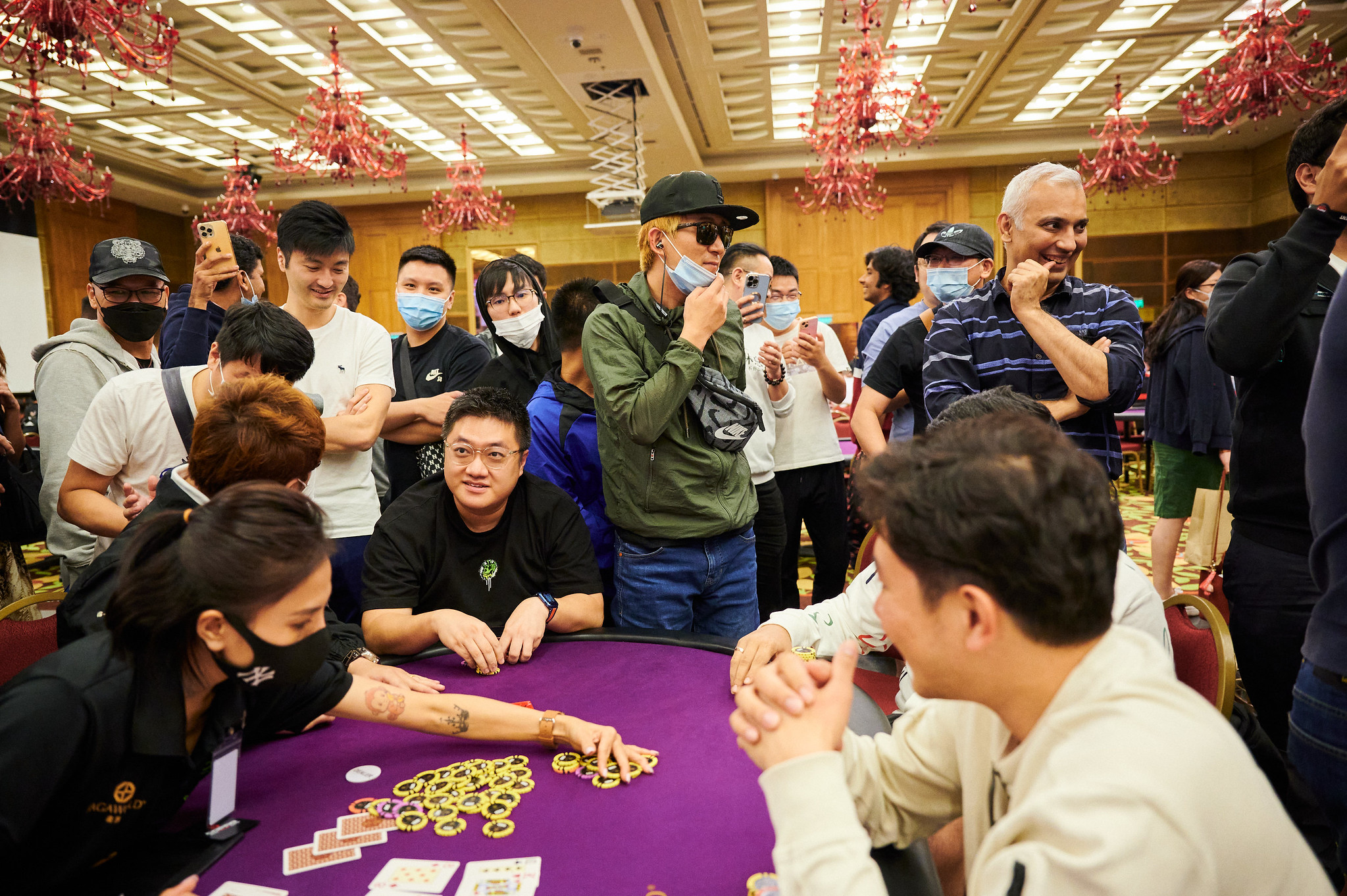 The last and final flight, Day 1C, of the WPT Prime Cambodia Main Event has finally concluded with the elimination of South Korea’s Jeungu Seo. Dzmitry Halubitski raises to 16,000 followed by Jeungu Seo’s all-in call of 40,500 from the big blind. The Belorussian asks for an exact count and calls, as he admits that he has a trash hand. Seo shows aKT off-suited while  Halubitski flips a 85 off-suited. A loud cheer follows when Halubitski’s ‘trash hand’  improves to two pair on the flop of A ❤ 8 ♦ 5 ♦ . The J ❤ on the turn gave Seo some outs with a gutshot straight draw. However, the 6 ♠ on the river sent him away as the crowd cheered at the bursting of the money bubble.

The late registration for the WPT Prime Cambodia 2022 $1,100 Main Event has officially ended. While the final flight, Day 1C, has recorded about 440 entries, the total number of entries at the Main Event across the three flights stands at 1,050 entries. The event has a record-breaking prize pool of $1,018,500, which will eventually be shared by the top 131 places, who will take home a min-cash of $1,810. All survivors on Day 2 will make it in the money, which means the top 55 survivors from Day 1c will make their way to Day 2. Currently, the day has 225 players still battling their way.

The ultimate champion of the tournament will pocket a handsome $179,160, including a $10,400 entry into the WPT World Championships to be held at the end of the year, along with travel expenses and accommodation. The winner also gets the prestigious WPT Prime trophy. The runner-up and second runner-up will also be awarded with trophies.

The final flight of the WPT Prime Cambodia 2022 Main Event has been breaking some records. The flight has so far gathered a huge entry field of 428 entries already, and there’s still some more time to go before the end of late registrations. This is the biggest entry field so far (Day 1A – 264 entries, and Day 1B – 364 entries). The total field size has also surpassed the 1,000 entries mark. The record of 896 entries at the WPT Prime Gold Coast Main Event in June 2022 has been broken. And that’s not all. The prize pool has touched the seven-figure mark (over $1,001,040), It happens to be for the first time that the prize pool of any poker event has reached the seven figures in Cambodia.

Spartan Poker pro Zarvan Tumboli is not enjoying his run so far at the Main Event. After not qualifying through the earlier two flights, Tumboli played the Day 1C event today. He posted the same on his Instagram stories saying “Main Event 1C. Have run terrible in the Main so far. Hope to turn things around today.”

However, as per the latest update from WPT, Tumboli has been eliminated. The Indian pro shoved all in for over 12,000 holding A ♠ 6 ♠. Anh Nguyen called holding pocket eights to see the board of T ♣ 7 ♣ K ♦ 5 ♠ 3 ♦ . Nguyen’s snowmen held as Tumboli had to move out. Can we expect Tumboli to re-enter?

Manish Lakhotia has been eliminated shortly after after the start of Day 1C. With the late registrations still going on. Will the pro fire his second bullet at the flight?

Flight Day 1C has begun and the players at Nagaworld Integrated resort in the beautiful city of Phnom Penh in Cambodia are flocking to the Ballroom at Naga 1 for their last chance to play the prestigious Main Event of the series. And in the coming hours, the numbers are set to increase as the Day 1C flight is the last flight leading to the Main Event.

The $1,100 Main Event has already attracted 610 entries so far and surpassed the initial $500,000 guarantee with ease. Here’s a quick lowdown of fights Day 1A and Day 1B:

Coming back to the Day 1C flight, every player participating will receive 30,000 in chips for a buy-in of $1,00. The game starts with a big blind ante at blinds 100/200. Players can re-enter unlimited times till the end of late registrations, which will stay open till the first six levels of the day. For today every level will last for 40 minutes each.

Stay tuned for all the latest updates delivered to you. Until then, read how the WPT Prime Cambodia 2022 has been for the Indian contingent so far.

Day 1B Ends With 43 Survivors

10:55 AM UTC, Aug 19: The field has now been whittled down to the final 43 players. The survivors will now progress to Day 2 and have bagged and tagged their chips.
Final chip counts after the end of Day 1B:

Day 1B Bubble Is Reached!

Anh Nguyen also exits, which reduces the field to the last 44 players.

Break Near the Money Bubble

10:10 AM UTC, Aug 19: Level 15 has now been completed and the field is down to the final 47 players. Players are currently on a 15 minutes break. The money draws closer as only 43 players will advance.

6:58 AM UTC, Aug 19: According to the tournament screens in the Ballroom at Naga 1, the Day 1B field now has 99 players. WPT Global ambassador Andrew Neeme is no longer in contention. Michael Falcon also has just over 20 big blinds to play with.

Triple Up For Lars Hougaard

11:55 PM UTC, Aug 18: Phillip Nguyen, Dazhang Chen, and Trong Hieu Nguyen enter into a three-way all-in. The players’ hole cards go face up and the board runs out A ♣ 6 ♠ 3 ♦ 9 ♠ J ❤ . Phillip Nguyen doubles up through TH Nguyen and Chen busts from the competition.

11:38 PM UTC, Aug 18: In the first level, Anand Kumar already has double the starting stack after he butted heads with Kenneth Burke and won another pot after that. Burke was not in his seat and missed his up and down draw against Kumar’s pocket nines (World Poker Tour).

11:21 PM UTC, Aug 18: A small pot forms preflop as three players are in action. The flop opens to reveal J ♣ 7 ♣ 2 ♦ and Harold Brooks bets 800 from the big blind. Michael Linstrom calls from the button along with the player from the small blind. When 6 ♦ falls on the turn, Brooks bets 1,800 to the pot and only Lindstrom continues. Brooks checks on the river T ♣ and Linstrom bets a sizable 5,200. This causes Brooks to fold and Linstrom takes the massive pot.

Shuffle Up and Deal!

The second starting day has begun with 43 players registered. Tables with at least four players on them have commenced.

The World Poker Tour (WPT) Prime Cambodia $1,100 Main Event began on a successful note. Held at the NagaWorld Integrated Resort in the capital of Phnom Penh, the event’s flagship tournament is well on its way to crush its $500,000 guarantee. Day 1A of the Main Event has already concluded with Adda52 Game Ambassador Kunal Patni leading the pack survivors.

So far, Day 1A drew in a field of 264 entries out of which 33 players advanced. There are two more starting flights remaining. The second flight, Day 1B, kicks off at 1 PM local time in the Ballroom at NagaWorld Integrated Resort. Players will have a starting stack of 30,000 chips and each level has a 40-minute duration.

After every three levels on Day 1B, there will be a break. The day will end once the last 12.5% of the player field is reached. There are unlimited re-entries available during the registration period which will close at the end of Level 6, before the start of Level 7.

Watch this space for all the live updates on the WPT Prime Cambodia 2022 Main Event.