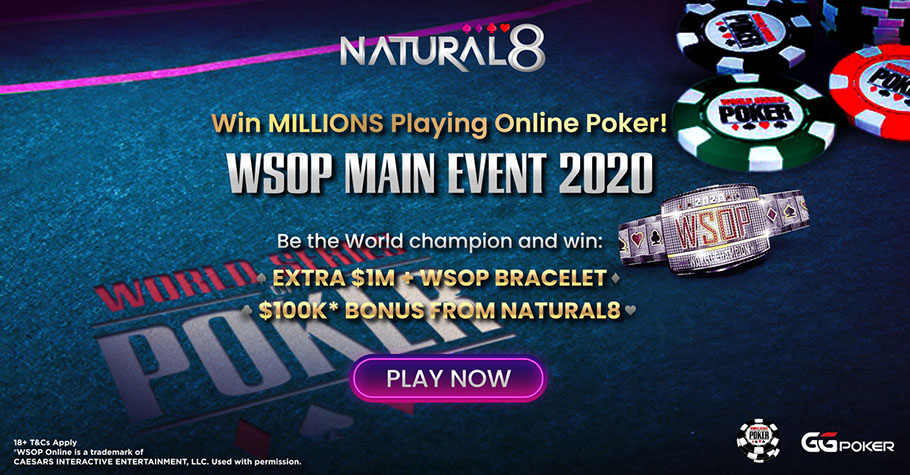 Bonuses Galore On WSOP 2020 At Natural8!


Every year, thousands of poker enthusiasts from all over the world head to Vegas to take part in the World Series of Poker, with a dream of earning a coveted gold bracelet and becoming the next World Champion of Poker.

While travel plans have been disrupted by COVID-19 pandemic, the showdown has moved to the virtual arena, resulting in a new world record for the richest online poker tournament in history – WSOP Online 2020. The new hybrid format for the $10,000 WSOP Main Event is a first of its kind. It will see American players in the states of Nevada and New Jersey play on WSOP.com, while international players will play on the GGPoker Network (GGPN), with separate $10,000 Freezeouts.

The domestic US-based tournament has a single starting day on 13 December, with Day 2 then playing down to a nine-handed final table the following Monday. The final table will play down to a winner at the Rio All-Suite Hotel & Casino in Las Vegas on 28 December.

For all international players, GGPN offers started on 29 Nov and will take place on 5 and 6 Dec. All survivors will combine for Day 2 on 7 Dec to play down to a nine-handed final table as well. The final nine will travel to King’s Resort in Rozvadov, Czech Republic. The final nine will whittle down to one, determining the contender for the WSOP Main Event bracelet. Both the winners of the domestic and international final table will then battle for the title and an additional $1 million in cash, at the Rio All-Suite Hotel & Casino in Las Vegas.

All players in the domestic and international tournament will start with 60,000 in chips, which represent 300 big blinds for the first level at blinds of 100-200. All online levels last 30 minutes each and registration will be available for 355 minutes, representing 11 levels and the following breaks.

Once the final nine players have been determined, the level duration increases to 60 minutes each until the domestic and international champion have been crowned. Tournament staff will round chips to the nearest denomination of “live non-value” chips in play and the blinds continue where they wrapped up online. However, odd levels will roll back to the nearest even level.

For the Heads-Up Championship Match at the Rio All-Suite Hotel & Casino, the two contenders will receive 500,000 in chips worth 500 big blinds in the first level.

How Can You Qualify?

Several dozen satellites are available to ensure a seat for the $10,000 Freezeout tournament. GGPN satellites start from as low as $0.50. Besides the step system, different mega satellites award direct entries to the respective Main Event starting flights:

While the tournament is played as a Freezeout, contenders can win multiple seats on the GGPN. Unused tickets will be converted to T$ (tournament dollars) upon completion of Day 2.

As one of the leading poker operators in Asia, Natural8 will be offering players additional exclusive promotions for the WSOP 2020 Main Event. One Main Event ticket will be awarded in an exclusive Freeroll to all Natural8 players. It will take place on 28 Nov at 12:00 UTC.

Additionally, if any Natural8 player qualifies for the international final table, they will get an exclusive Team Bling sponsorship worth up to $100,000:

So far, Natural8’s Team Bling consists of eight players who have all won a coveted WSOP gold bracelet during WSOP Online 2020. Will there be a ninth member and new team captain by the end of the year? Join the action now and be part of history, for when a new WSOP Main Event champion is crowned!

From Support Queries To Memes: The Life Of Simr...