From Support Queries To Memes: The Life Of Simran Fernandez


Simran Fernandez. Does the name sound familiar? Many avid online poker players on Facebook must have heard of or at the very least seen the plethora of memes dedicated to her. Various poker groups on Facebook have started to erupt with memes on this particular gal, but who is she? A popular poker player? A secret agent? Well, Simran Fernandez is actually a Spartan Poker representative working to ensure that all of Spartan’s active user base are given the best support possible.

Users having gameplay troubles or issues with pending cashouts or deposits, she’s the first one they end up reaching out to! If players have issues with regards to even their Spartan accounts or KYC or TDS-related queries, Simran has got all the answers. Basically, she’s there to provide all sorts of solutions to players. Let’s not forget her habit of constantly rewarding players for hitting some outstanding hands!

She has been known to give out bonuses, free tickets, and special promo codes to players who post some of their best hands in a game. Full house, quads, and the rare royal flush are some of the hand rankings that Simran will reward players for, once they post a screenshot of their best hands on Facebook and tag her. She is, of course, biased to Spartan Poker players (she is their rep after all!).

She’s Always In The Limelight! 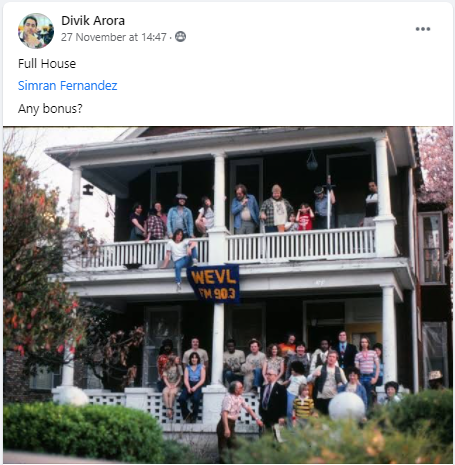 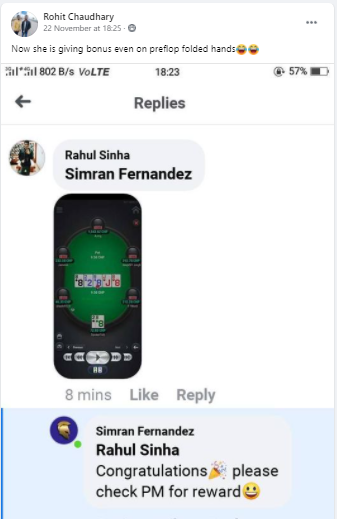 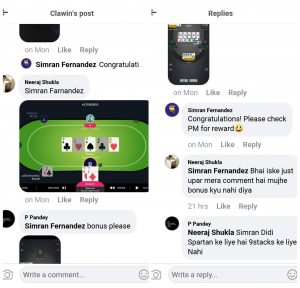 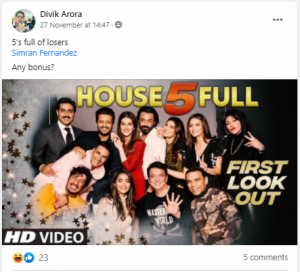 But no one is perfect and Simran too has had her fair share of ‘fails’ which prompted many to take to  social media and roast her in the classic meme format. Members of poker Facebook groups like The Players Group (TPG) and Indian Poker Bakchods have been posting a string of memes poking jokes on her usual prompt responses and occasional fails. We’ve posted some of the hilarious content, but you can always join these groups on Facebook for more!

But even with all the jokes being thrown at her, she remains calm and totally cool about it, as pointed by one of the players. 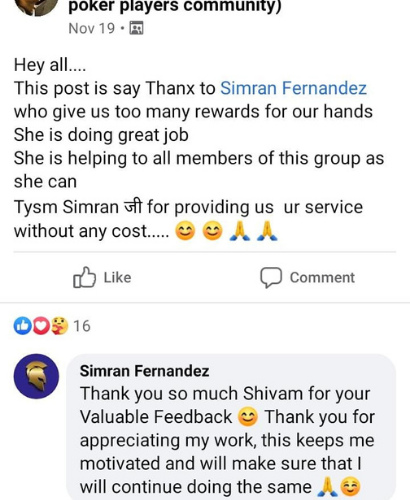 Gutshot reached out to Simran Fernandez to ask her about her role in rewarding players on social media. She said, “Poker is all about permutations and combinations, so as and when some rare hands are hit and people are excited to share them, I reward them with exciting bonuses. So if you’ve not got a bonus from me yet, you know what to do!”

“It’s my duty to ensure this game of skill is promoted in the country. You know you’re doing something right when everyone knows your name. So let the memes keep coming,” she added about all the attention she’s been getting on social media!

Besides handing out cool bonuses and free tickets to satellites, she also helps Spartan Poker players with any queries that they might have about the game or any stuff related to deposits, cash outs etc. With people showing no signs of stopping the onslaught of memes anytime soon, let’s hope Simran’s sense of humor prevails!