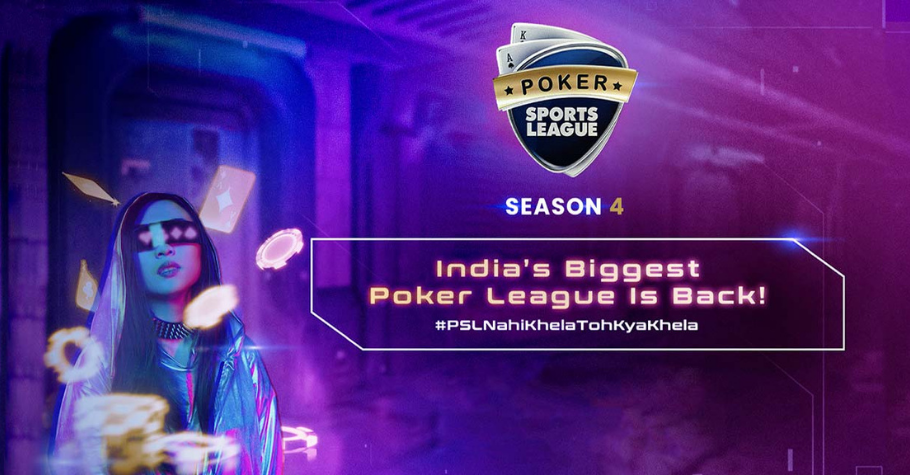 
The excitement and vigour of India’s biggest and most celebrated Poker Sports League (PSL), powered by FairPlay News, is brewing as the virtual leg of the Season 4 concluded on 13th April 2022. The season is set to kick-start its boot camp starting on 20th April and host the most awaited live finale at Deltin Royale from 21st April 21st to 23rd April 2022. As this year’s league is in a Phygital format, the finale will be streamed live for the first time on Voot, the OTT streaming service owned by Viacom18.

Deltin Royale and Adda 52 are announced as the venue partners and online partners, respectively, for this season. A total of six teams with 12 players competing against each other for a prize payout of ₹2 Crore plus. The season 4 kick-started on March 29th and went on till April 13th with 18 matches in total within the 3 weeks. The matches were played in different categories like Qualifiers, Women, Pros, Wildcard, Captains, Owners and 6 Multi-Table tournaments. The defending champions, Deccan Aces had a rocky and slow start to their season, however, they did finally catch their stride and ended up finishing at fourth place.

On the other hand, Kolkata Kings steadily maintained a first or second position through the entire virtual phase and finished in first place, followed by Gujarat Falcons in second place. The Mumbai Anchors played well and managed to take third place. Delhi Czars finished fifth, followed by The Goan Nuts, who came in sixth.

Speaking about this year’s season, Pranav Bagai, CEO and Founder said, “This season has been a special one since the qualifiers in this tournament performed above and beyond our expectations. They played as well as the pros if not better, gaining their teams a high amount of points. It was exhilarating to witness the spirit of gaming as the players got so much to learn and were thoroughly entertained. It felt like gaining education straight out of a poker school.

ALSO READ: Poker Strategies You Must Use In This PSL Edition!

Having said that, the captains performed extremely well as mentors and were nothing short of amazing. The workshops accelerated the comprehension of learning the game, especially for weaker players, which was well reflected in the gameplay. The bonding and team spirit were very evident in each player’s performances. I am extremely happy that we got to see how poker can be played and strategized as a team sport. Now as we aim to make this season more exciting, tech-savvy, and accessible to millions of poker enthusiasts across the country, we are excited to host the grand finale of PSL –Season 4 at Deltin Royale, where the fans will get to appreciate the never-ending poker action.”

Recently the league announced its partnership with OTT streaming service, owned by Viacom18, VOOT as their official streaming partner for this season. Through this association, the viewers got to enjoy the live streaming of the entire league on VOOT. This season, a special focus was given to upcoming qualifiers and key pro-players, with high investment biddings and significant retainers, which made this season more exciting. The season’s selection ceremony saw 6 teams representing six Indian provinces, namely Delhi Czars, Deccan Aces, Goan Nuts, Gujarat Falcons, Mumbai Anchors, and Kolkata Kings. A total of 36 qualifiers and 12 pro-players were a part of this season. In addition to these, it has 6 spots for women and 6 for substitutes.

Poker Sports League is India’s first poker league and the world’s largest poker league in Prize Pool and Participation. The idea behind PSL is to sportify the game of poker through a unique, team-based format. PSL is an equal opportunity platform where anybody who has the zeal to play poker can participate & start a successful poker career. PSL is entirely free to enter, where you have a chance to win from big prize pools along with claiming a name & fame on a national level.

Staying true to its vision, Poker Sports League takes its offerings to the next level in Season 4 by going ‘PHYGITAL’ for the first time. By going ‘PHYGITAL,’ we have combined the best from physical(live) and digital(online) poker and curated a format where every player gets an opportunity to showcase their skills in both arenas.