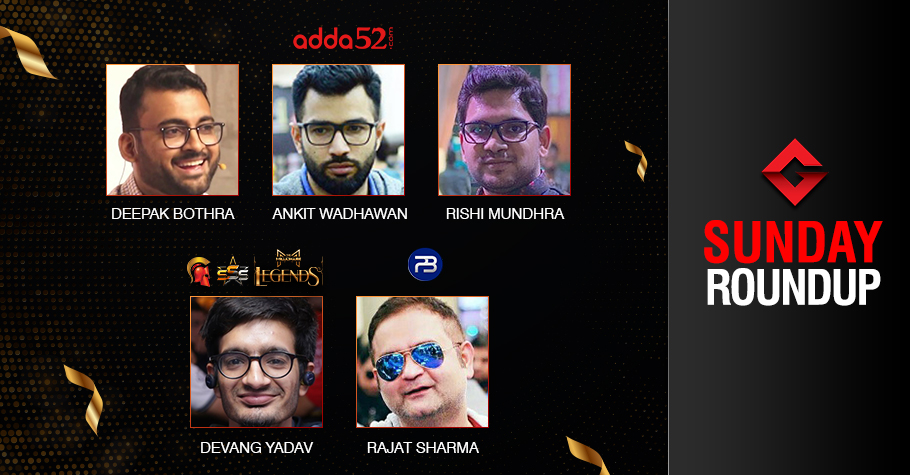 
Sundays are the best for online poker players. All the websites bring out the biggest guarantees on this day as you usually see most people free from other work obligations. On Spartan Poker, the INR 1.5 Crore GTD Millionaire Legends took place while as part of the AOPS series, a couple of high-value tournaments were hosted on Adda52 as well. Keep reading for a complete summary of the Sunday majors…

What a start to the month of May it was on Spartan Poker. With guarantees rising all over the country, Spartan hosted Millionaire Legends with two starting flights and the final day all hosted on a single day. With a big buy-in of INR 27,500, it was a pleasant surprise to see participation in such big numbers, with 106 players coming through to Day 2 and 100 of them being paid with a min-cash of INR 37,500.

Eventually, it was regular circuit grinder Devang Yadav aka ‘equity_hunter’ who ended victorious in this mega event, adding yet another massive tournament to his trophy cabinet. He usually ships only the high-value tournaments online and if we’re right, this is now his largest online score, adding INR 30 Lakh to his bankroll after striking a deal with ‘karanmangla’ in heads-up. Both of them took home similar prizes after the chop, while Yadav was declared the official winner. It was a tough final table with the likes of Dhaval Mudgal (3rd), Madhav Gupta (6th), Sahil Mahboobani (7th) and Sahil Agarwal (8th) all making deep runs.

Along with Millionaire, there was the weekly Sunday SuperStack tournament which took place simultaneously, and the winner there turned out to be Nitin Gupta aka ‘mickyn34’ who beat a tough field to secure a handsome payout of INR 8+ Lakh in this event.

It’s not the first time you’ve seen Deepak Bothra aka ‘bothras’ making a large cash on Adda52 and we’re pretty sure it won’t be the last time either. As part of the Adda52 Online Poker Series (AOPS), the platform hosted 5 starting flights for this tournament between 1-3 May and Day 1E was obviously the biggest of them. The guarantee was slightly passed to generate INR 1.04 Crore in prize money and this was distributed among the top 253 spots, with Bothra making the deepest run and adding the biggest prize of INR 20 Lakh to his poker bankroll. The event ended at 3:40am and Bothra would’ve gone to sleep a very happy man indeed!

The popular Adda52 Millions also took place last night and this featured tournament always sees the best pros of the country in action, with the buy-in being a high one INR 11,000. Eventually, it was another very tight final table with a lot of known names but Ankit Wadhawan aka ‘d00mtr00p3r’ managed to top them all in this contest, winning the biggest prize of the night from the 229-entry field. He took home INR 6,28,605 after beating Rajat Sharma aka ‘OshoSwami’ in heads-up, the latter adding INR 3,66,400 to his poker bankroll.

The third of the high-value tournaments on Adda52 last night was Big Slick which saw the biggest participation because of a more affordable buy-in of INR 2,500, attracting 720 entries to this event. Having won a satellite ticket to this event earlier in the day, Rishi Mundhra aka ‘ronaldo94’ completed a dream run to go on to ship the tournament, being awarded with the top prize of INR 2,88,339 for his run. In heads-up, he got past Rajat Mahajan aka ‘Happyfish’ who collected INR 2,11,552 for finishing second.

Turns out, it was a great night for Rajat Sharma as well. After finishing second best in Adda52 Millions, he went on to ship the PokerBaazi featured tournament of the night which had a buy-in of INR 5,500 and saw a total field of 616 entries. Playing as ‘LungFakeer’ on the platform, Sharma ended an 8:32 hour grind when he beat ‘flopCheck’ in heads-up to win the title and INR 5.82 Lakh in hard cash last night!