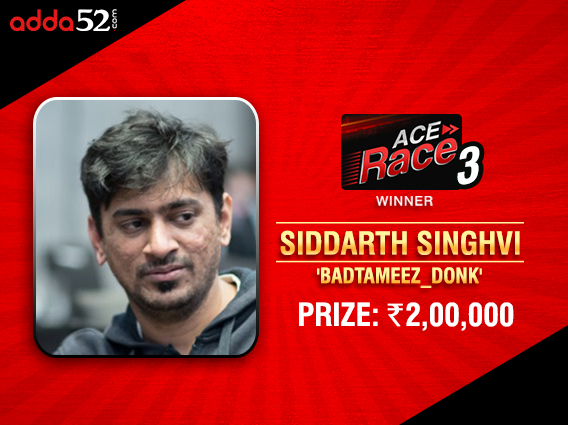 This is plural because their competition is divided into three installments of ten days each. A total of INR 15 lakh is given away through this leaderboard, divided into INR 5 lakh on each of the three leaderboards through the month. Yesterday, the month of October came to an end and it was none other than Siddarth Singhvi who won October’s Ace Race 3 Leaderboard.

Singhvi is becoming a strong force to reckon with, especially on Adda52, where he has won most of his last few major titles. He plays on their platform under the name ‘badtameez_donk’ and you’ll always find this player running deep in their featured tournaments – Blaze, Go Goa, Maverick, Godfather, Whale, Crack Jack, Adda52 Millions, Mega Suits and Beast.

He did extremely well in these qualifying tournaments between 21-31 October and didn’t just win the Ace Race 3 Leaderboard for the month, but he won it very comfortably. He scored 548 points and the next after him were ‘orionn7’ and ‘fourteenk’, both of who were tied at 416 points.

Singhvi got here majorly because of his Adda52 Millions victory that came after a heads-up deal on the night of 21st October. He has been a regular money finisher in all their major tournaments over the last month or two, and this is the second Ace Race victory he has for the month of October, also winning the Ace Race 1 Leaderboard.

Gutshot caught up with Singhvi to ask him about this victory. He said, “I’m very happy to see the consistency getting rewarded on a weekly basis.’ GutshotMagazine.com is the first to get news of poker tournaments and promotions from across the country, so stay tuned for more similar stories.