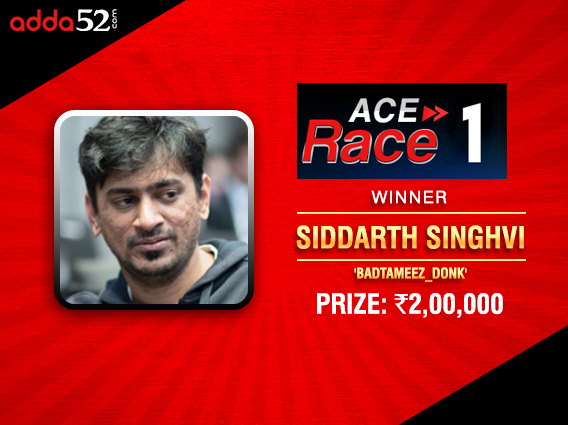 
There’s always added incentive to play poker on the biggest online platforms in India. Apart from high-guarantee tournaments, there are plenty of promotions, bonuses, offers and leaderboard competitions where users get rewarded extra. The Ace Race Leaderboard competition is one such additional incentive on Adda52.

The Ace Race Leaderboard is a unique offering where the most consistent players in Adda52 featured tournaments get paid out not once a month, but thrice a month. Yes, a total of INR 15 lakh is given away each month, split into three installments of INR 5 lakh each, after every ten days of the month.

The month of October is currently underway. We’re done with the first installment of the Ace Race Leaderboard for the month and it was none other than Siddarth Singhvi aka ‘badtameez_donk’ who topped the leaderboard, for his performances in the first ten days of the month.

Singhvi took away the top prize of INR 2,00,000 out of the total of INR 5,00,000 which was given away to players for the competition running between 1-10th October 2018. Qualifying tournaments include Adda52 daily featured tournaments – The Roar, Go Goa, Maverick, Godfather, Whale, Crack Jack, Adda52 Millions, Mega Suits and Beast.

Gutshot caught up with Singhvi after this win and he didn’t believe it was a very difficult first ten days of the month. He said, “With so many players busy playing in Vietnam and at the Badshaah Series in Goa, I guess this was the easiest it could get to win any Ace Race! I’m sad that I couldn’t make any of those trips but happy that I won this at least.”

The Ace Race 2 Leaderboard is now underway, with the qualifying period being 11-20th October 2018. Keep reading GutshotMagazine.com to see who wins that competition on Adda52.