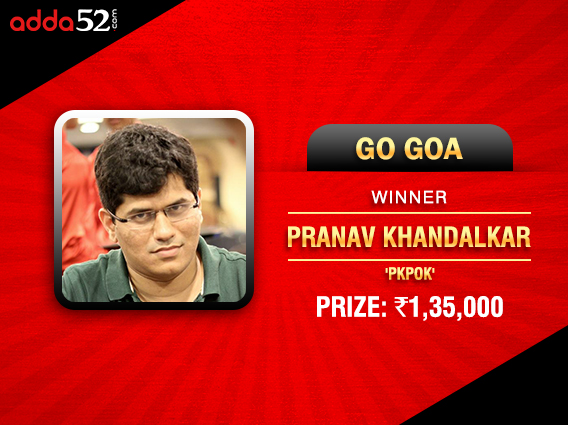 
This has been a fantastic year in online poker for Pranav Khandalkar so far. In fact, he has stepped up his game particularly in the last few months. The rise to fame began in May this year, when he shipped the Millionaire on Spartan and since them, he has been winning across all major platforms, including winning a package trip to WPT Korea on PokerDangal in August.

Adda52 also hosts a leaderboard competition called Ace Race which awards INR 15 lakh to the most consistent players spread across three installments in every month. These periods last ten days each and with Khandalkar winning two featured tournaments between 11-20th November, he also topped the Ace Race 2 Leaderboard for November.

It would’ve been a very special night for the player indeed. Not only did he win INR 1,35,000 for shipping Go Goa, but he also secured himself a seat into the INR 1.2 lakh SnG to win a trip to Goa. Additionally, he was awarded INR 2 lakh for topping the second installment of this month’s Ace Race Leaderboard.

Khandalkar was very pleased with his performance and Gutshot caught up with him to get his views on the same. He said, “I was 3rd on the leaderboard and was closely competing with the first two. My objective was to top the board more than winning the tournament. I played quite conservatively till we were ITM but once on the FT, I got aggressive and picked up a few hands. I’m very happy to ship tournament as well as the Ace Race. This is my second title on Adda52 after Maverick last week.”

The Go Goa tournament saw 180 entries, with a buy-in of INR 2,750. After a long grind that began at 8pm, Khandalkar beat ‘ikkatikka’ in heads-up, which ended at 1:41am this morning. Khandalkar made a good addition to his poker bankroll that night and will be looking to keep it up in the weeks and months to come.