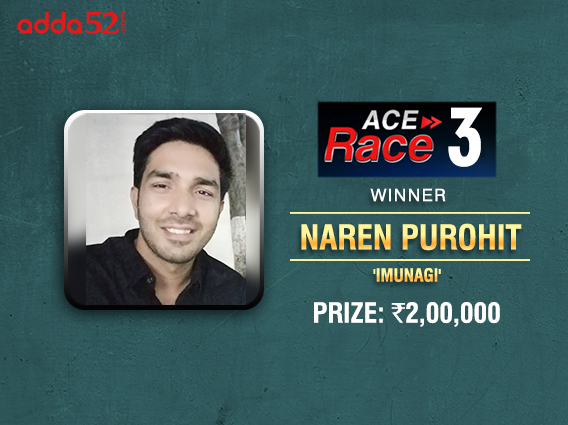 
Most of the top poker companies in India look for new ways to reward their users and Adda52 is one of the leading sites in the country, so they do their share of innovation as well. The recently launched the Ace Race Leaderboard, which is a monthly promotion that runs in three installments throughout the month.

Recently, the month of August came to an end, and with that, we reached the end of August’s Ace Race Leaderboards on Adda52, which awarded INR 5 lakh in cash prizes on each leaderboard, and a total of INR 15 lakh awarded throughout the month, to the best performers in their featured tournaments.

Purohit beat some top players to win August’s Ace Race III Leaderboard on Adda52, with a total of 938 leaderboard points. However, he would’ve been relaxed over the last couple of days, with enough of a lead over ‘SelfClaimedPro’, who had 826 points. Purohit was awarded the top prize of INR 2 lakh, while SelfClaimedPro took away INR 1 lakh for finishing second.

There were a few well known players on the leaderboard, including Rohit Begwani who finished third for INR 68,000. The top 9 players were paid out a minimum prize of INR 10,000 for their consistency between 21-31 August. August’s Ace Race II Leaderboard was earlier won by Goonjan Mall aka ‘gmtesting’.

Gutshot caught up with Purohit after he won the final Ace Race leaderboard for August. He was excited about this victory and hopes to keep winning on Adda52. He said, “After so many top 5 finishes in the leaderboard race, finally finishing first is a good feeling after all. and yesss, many more to come. Cheers”

Keep reading GutshotMagazine.com for more updates on the top poker promotions in India, as well as updates on the Ace Race Leaderboards of September.