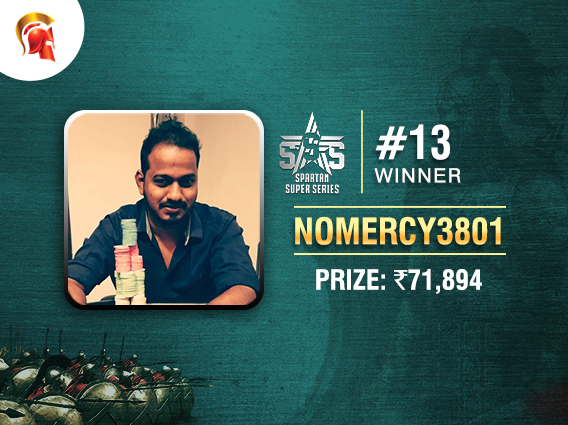 
The festivities continue at The Spartan Poker, where new winners are emerging every day, with the Spartan Super Series currently underway. Anurag Srivastava shipped the first tournament on SSS Day 3, while Abhineet Jain followed him by winning the second. The third tournament of the day then kicked off at 6pm IST.

That tournament was SSS Event #13 INR 2.5 Lakh GTD which had a buy-in of INR 880. The participation for this tournament crossed expectations, with 409 entries beating the guarantee and creating a new prize pool of INR 3,27,200. This was then divided among the top 27 players with a min-cash of INR 2,945.

Outlasting all these entries was Mayur Vengurlenkar who plays under the name ‘Nomercy3801’. Clearly, he had no mercy on the rest of the players, as he beat them all and took down the title, while also taking away the top prize of INR 71,894. His final victim was ‘reddiered07’, who he beat in heads-up. The player won INR 48,753 for finishing second.

reddiered07’s chip stack was slowly diminishing and was facing a 1:5 chip deficit by the time they reached what became the final hand. This took place in Level #40 where the blinds were at 12,000/24,000 – 3,000. reddiered07 was dealt pocket Eights so he decided to go all-in pre-flop, while Vengurlenkar decided to make the call with Qc 5c.

It was a topsy-turvy hand as reddiered07 held the lead pre-flop, but Vengurlenkar soon took the lead with a pair of Queens, while the final card on the 4h Qs 4d flop gave reddiered07 the lead again, with two pairs. Vengurlenkar then hit two pairs himself with the 5h on the turn and the Ad on the river allowed him to maintain the lead with Queens and Fives.

He took down the pot and was crowned champion of SSS Event #13, while making a useful addition to his poker bankroll. Remember, this isn’t the first big win for the poker player, also having shipped the Mega Freeze tournament on Spartan a couple of months ago.