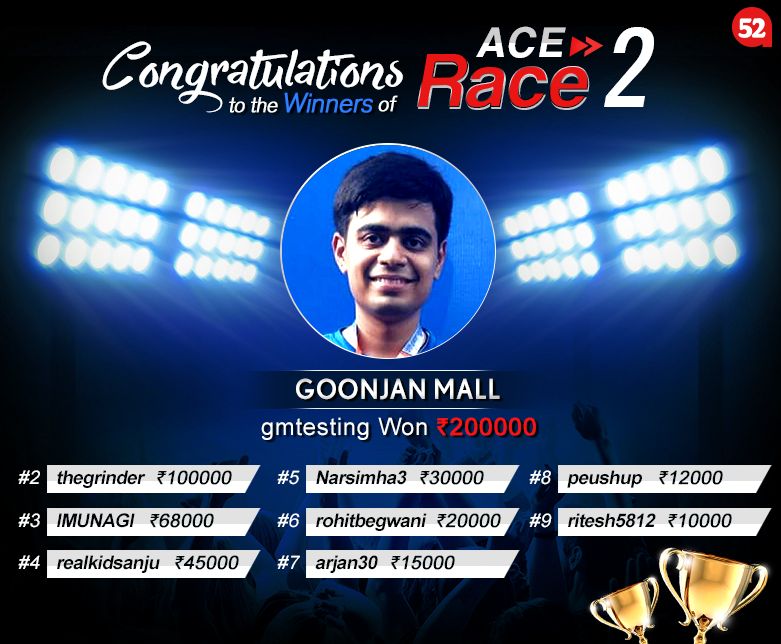 
Most of India’s top poker companies are running since years because of their loyal user base. Thus, these companies always search for ways to improve their users’ experiences on their respective platforms, while also looking for ways to constantly reward these users.

An example of this is Adda52’s recent promotion known as the Ace Race Leaderboards. Instead of the usual monthly leaderboard, Adda52 decided to break down the Ace Race into three parts, with three different leaderboards to be topped during the month of August, with INR 5 lakh given away on each leaderboard (total of INR 15 lakh in the month). Thrice is nice, isn’t it?

These leaderboards are broken down into Ace Race I, Ace Race II and Ace Race III, which are contested between 1-10 August, 11-20 August and 21-30 August respectively. Recently, the Ace Race II came to an end, with popular player Goonjan Mall aka ‘gmtesting’ finishing as the top ranked player.

Gutshot caught up with Mall after winning this leaderboard and receiving the top prize of INR 2 lakh. He said, “It was a good experience. I got lucky to go deep in a few tournaments. It’s a closely fought leaderboard and anyone could have won it till the 9th day. Overall, this just adds a nice fun element to the game. Appreciate Adda52 giving back to the community this way.”

The player has been in top form in online poker of later, having won plenty of titles on The Spartan Poker as well, including The Elite on 11th August and the Sunday SuperStack tournament on 13th August. Keep reading GutshotMagazine.com for more updates from the world of poker.