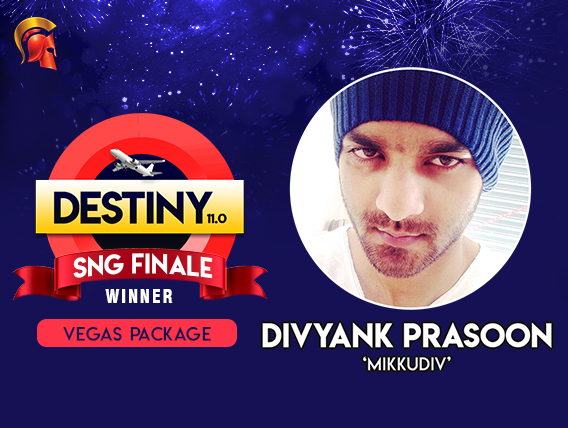 
Destiny 11.0 is one of the most prominent online tournament series hosted by Spartan Poker. Numerous poker enthusiasts compete with one another to reach the SnG Finale that awards the winners a chance to win Las Vegas packages. It was a night to celebrate and a Sunday to be reminisced by Divyank Prasoon, the ultimate champion of the 11th edition of Destiny on Spartan.

A total of 10 tournaments lined up in the Destiny series and 10 winners took to their seats in the Finale SnG at 8 pm yesterday (3 November) hoping to grab the top prizes. Playing under the username ‘mikkudiv’, Prasoon was declared as the 10th and final winner of Destiny. He has taken down several online tournaments and increased his poker bankroll in recent years. The previous night was definitely different from the rest.

The field was lit on Spartan Poker with important poker personalities of the country but nevertheless, the Vegas packages only belonged to the top 3 worthy finishers including Prasoon who won a Business Class Flight Ticket along with 12 nights of stay in Vegas.

Closely following the champion of the night was ‘pokerkaps’ winning Business class flight tickets + 8 nights of stay. Resting at the third position was another known name, Anirudh Reddy aka ‘flash’ also awarded the a to and fro trip along with 5 nights of stay in the poker capital of the world.

Gutshot got in touch with Prasoon who stated, “It’s hard to express, I’m overwhelmed. Shipping Destiny SnG, sitting with sharks in the field boosted my confidence level. I was the shortest stack on the table yet managed to ship the tournament.” He also added, “I will be taking this great opportunity given by Spartan Poker and hope to do well in Vegas.”

For latest updates on poker news and tournaments around the world keep reading GutshotMagazine.com and stay tuned!