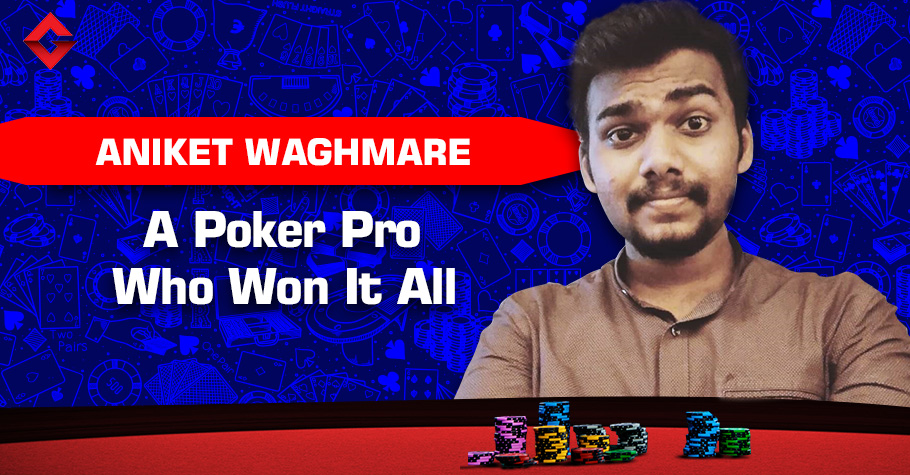 Aniket Waghmare on his valiant victories in poker, life and more


India Online Poker Championship (IOPC) is the most prestigious poker event in the country. This tournament series witnessed several newbies and well-known poker pros clinching titles and collecting piles of cash in prize money. One such player, who made it big during IOPC January 2021 was Aniket Waghmare, the winner of IOPC Millionaire Legends and the Mastermind title. The ace player cashed INR 36,36,325 and a customized Breitling Avenger Chronograph 43 watch as winning prizes respectively.

We had a chat with this 28-year-old Data Analyst from Mumbai to know more about his game, and the feeling of being a winner of Mastermind Title for the first time.

ALSO READ: Rise Of The Underdogs: These IOPC Jan 2021 Winners Left Us Awestruck

You shipped the IOPC Millionaire Legends and the Mastermind title. Could you tell us about winning such massive prize money and how you shipped these tournaments?

I went into the Final Table of both these tournaments as a big underdog. So it was surreal to win them both! Previously, I had a couple of scores in the 800-900K range. I was also very eager to break the Million mark! Not just that, but also to do it on a live stream, against great players, was an amazing feeling. Winning the Mastermind title and the Breitling Avenger Chronograph 43 watch was the cherry on the cake. It motivates me to work very hard and improve my game so that I can live up to the standard I set during IOPC Jan 2021.

Were there any particular strategies you worked for IOPC Millionaire Legends?

My strategy was nothing special. I did some study on the Independent Chip Model (ICM) and short handed play on the day of the tournament. I played very tight until the extreme short stack busted. Post flop, I tried to play aggressively as I had short-medium stacks. Controlled aggression is what I was aiming for. But mainly the cards were very good and that lead to me being the chip leader when there were only three players. From there I was confident about shipping the tournament.

How did you anticipate the IOPC Millionaire Legends tournament would go?

I knew I was up against poker pros like Kartik Ved, Ashish Munot and others on the Final Table. Once the short stack busted, I knew I was the least experienced on that table. But I always back myself to win against anyone. I kept reminding myself before the Final Table started that I’ve been in such positions before and have emerged as the winner. So, the plan was to put the best foot forward and hopefully the cards will also back me up; in the end it all worked out well.

What message would you like to give to the budding poker players?

Like most things in life, there are no short cuts in poker. Do not expect to be one of the best quickly. Study hard and work hard off the table. Results will come eventually. And don’t waste energy over things you can’t control. So, learn to be strong in the face of tilt and variance.

How would you describe yourself as a poker player?

Generally, in life, I don’t get angry or distressed easily. I think that reflects in my poker as well. I’ve learnt to not tilt much, and to shake off bad beats quickly. I try to be fluid with how I play and change my game play according to the situation. I try to play as logically and analytically as possible. I don’t like the traditional ‘gambler’ attitude towards the game, and my aim is to learn as much as I can to minimize the luck factor. I think I’ve just started and have a lot to learn and improve in my game.

What is the significance of your nickname ‘Ntwadumela?’

It is the name of a lion from a wildlife documentary I watched. It’s an African name, which means ‘He who greets with fire.’ I thought it sounded very badass! I recommend everyone to google ‘Ntwadumela’ and watch the first video. It is epic and then maybe someone can pronounce my name correctly!

To conclude the conversation on an introspective note, Waghmare surely makes us realize that his approach towards the game is quite unique and noteworthy. Hope to see this champion win many poker titles in the future.