Big One for One Drop poker event caught major attention after its debut in 2012, making history as the highest-stakes tournament ever held that year. One may definitely remember the event when barefoot player, Antonio Esfandiari took down the first event for a massive $18.34 million payday. Since, its officially the World Series of Poker (WSOP) season, and the first-ever WSOP Online kicked off yesterday, today we take a tour, 6 years from now to witness a player taking center stage who went from anonymous to poker famous with the turn of a card!

Participation dropped that year from 48 to 42 and exactly six years ago on 1 July, these handful players were hunting for millions. And that day a rising prodigy Daniel Colman walked away with a life-changing prize of over $15 million along with his first-ever WSOP bracelet defeating the poker legend Daniel Negreanu in heads-up to become the superstar. In the month of April, the 23-year-old had just about $350K in total live winnings, within a span of eight weeks he turned it around to over $18 million, propelling him to six on all time money list. 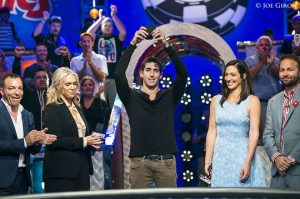 But just as quickly as he created history, Colman turned down the post-tournament routine interview and left the spot within five minutes. The Las Vegas Sun’s story about the night was even headlined “Reserved star or rich scrub?”

“My reaction wouldn’t be different. I wouldn’t celebrate, I wouldn’t want to talk about how great the feeling was because for some reason, I don’t feel that way,” said Colman. “So I’d do the same thing. I’d probably give interviews and talk about these feelings I have.” However, those feelings might be a part of a story that may have been misunderstood at the time.

Momentum seemed to be with Negreanu during the heads-up but everything changed quite soon. In the final hand of the tournament, Negreanu shoved all-in for his last 20 million chips with A 4 and Colman called with K Q. Flop opened A J 4 promising Negreanu two pair, but turn T certainly changed the game and 7 on river gave him the second biggest win in the history.

The Canadian pro was seeking his 7th bracelet, but the 2nd place finish was worth $8.28 million, skyrocketing his live tournament earnings to $29.79 million and taking him to top spot on poker’s All Time Money List, around $3.5 million ahead of Esfandiari in second place.


Colman was adding millions more to his winning but never claimed WSOP gold again. Until now he recorded nine WSOP cashes. According to Hendon Mob, he finished 1st in 2017 Poker Night in America. His last recorded cash was WPT Main Event in Las Vegas where Colman finished 14th for $61, 436 back in 2017. As of today, he sits 1st in Massahusetts all time money list and 8th in popularity ranking with his total winnings exceeding over $28 million.