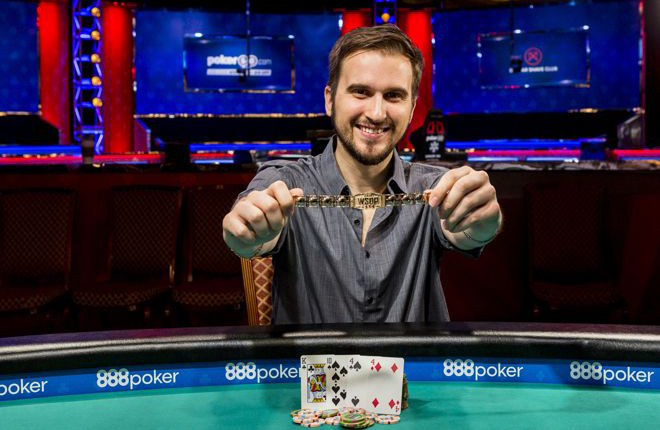 
Sunday evening saw France’s Julien Martini become the first French player to win a WSOP title on U.S. soil since 2014. Martini was also the first non-American and first European player to win a bracelet at the 2018 World Series of Poker. Originally from Paris, Martini who resides in Taipei now, outlasted a field of 911 runners to win WSOP Event #4: $1,500 Omaha 8-or-Better for $239,771.

The prize pool topped $1.2M with first place not quite getting a quarter of a mil. Not too shabby considering it’s an O8 event. This event required four days to play down to a champion. Play was suspended after ten-hours of action on Day 3. At that point, four players remained. Kate Hoang and Julien Martini bagged up the two biggest stacks remaining. They were poised for an inevitable showdown. Julien Martini defeated Kate Hoang heads-up for the bling and $239,771 in cash. Seattle’s Hoang walked away with a runner-up share worth $148,150. This marked the sixth-career cash at the WSOP for Martini and his second overall final table. He took eighth in a 6-handed NL event last year.

Happy Shulman missed the final table by a few spots when he busted in 12th place. The godfather of Scandi poker, Chris Bjorin went deep but his run ended in 17th place. And yes, in case you were counting, Chainsaw cashed in this event! This marked the first time Kessler cashed in this year’s WSOP. Among the other notables who went deep and cashed… Maria Ho, Chainsaw Kessler, Mike Noori, Mike Wattel, John Racener, Mike Leah, Victor Ramdin, Shaun Deeb, Perry Friedman and Robert Mizrachi.