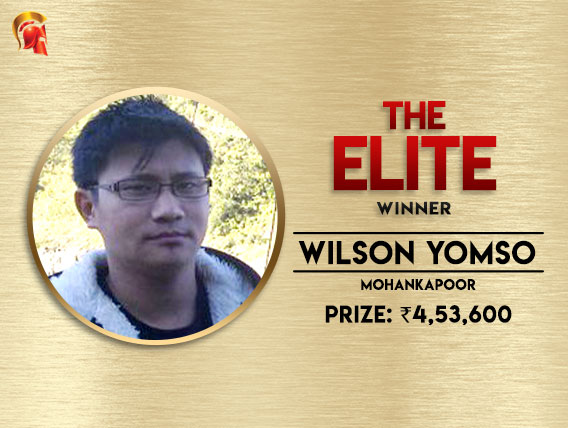 
The Elite INR 18 lakh GTD is one of the daily featured tournaments on The Spartan Poker and as the name suggests, it’s one for poker’s elite group. The tournament has a high buy-in of INR 11,000 and only the best in the business would be a part of this tournament, when it takes place every Friday night at 7:30pm.

The success of this tournament over the past few months has led to Spartan bumping up the advertised guarantee, with a new INR 18 lakh GTD. However, this guarantee was beaten as well, with 189 entries creating a new prize pool of INR 18.9 lakh and this was shared among the top 20 places with a min-cash of INR 25,326.

Like we mentioned, it’s always a tough field in The Elite and yesterday was no different. Ultimately, after a long grind of 7 hours and 14 minutes, it was Wilson Yomso aka ‘MohanKapoor’ who came out on top of this field, winning from the FTRPoker platform. He won a massive first-place prize of INR 4,53,600, adding another online poker title to his name.

Finishing in second place was Spartan Ace Abhishek Jalan aka ‘Abhishekj’, who is a popular player in the online and live circuit. He was awarded pretty well for the runner-up finish, claiming INR 3,08,070. In what became the final hand, both players hit a pair of Aces on the board and Yomso won the pot with a higher kicker, J.

Finishing in 5th was Sahil Agarwal aka ‘Nasheyy’, another popular player who recently won a couple of titles in the SSS, including the SSS High Roller. In 6th place was Abhinav Iyer aka ‘schumi91’, also taking away a 6-figure score, just a couple of days after shipping the Paycheck tournament on Adda52. Also finishing in the money was Arjanveer Chadha aka ‘instrumental’, who also shipped the Triple Bubble tournament yesterday. Keep reading GutshotMagazine.com for more updates on the top poker tournaments in India.