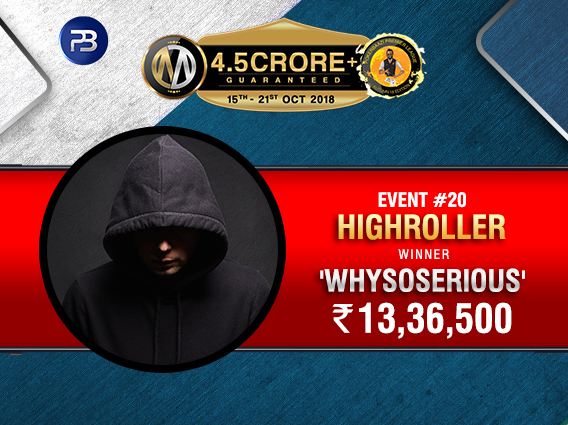 
Four days of the PokerBaazi Premier League (PPL) have passed and you couldn’t have gone without noticing the player ‘WhySoSerious’ on the virtual felts at PokerBaazi. This player, apart from a big win last night, has a total of 9 cashes in just 16 tournaments played so far in the PPL Autumn Edition. How’s that for consistency?

After three days of cashing out in various tournaments at the PPL, WhySoSerious kicked it up a notch, deciding to bring home a title as well. And what a brilliant one he chose to win too. The player walked away with the biggest prize of the series so far after he shipped PPL Event #20: INR 50 Lakh GTD HighRoller 6-Max last night.

It was never going to be easy to come out on top of this tournament as an entry fee of INR 27,500 can only be afforded by the best in the country. We saw a number of these best players last night, creating a field of 264 entries (including 100 re-entries) which destroyed the guarantee and put up a new prize pool of INR 66 lakh!

With a lot of money at stake, players would’ve been on top of their game, but none more than WhySoSerious, who emerged victorious and took home the biggest pay-check of INR 13,36,500. In heads-up, he beat ‘Qweasdzxc’ who won the runner-up prize of INR 10,06,500. These two players were the only two to take away 7-figure cashes while all in the top 13 took home 6-figure cashes.

Both these players preferred to stay anonymous even after such big wins online, but there were still quite a few known PokerBaazi players, especially on the Final Table. Finishing in 3rd place was Phanindra Akkina aka ‘phanindra’ who also received a handsome pay-out of INR 7,59,000, while Lakshay Grover aka ‘BaazigarIV’ finished 4th for INR 5,61,000.

The big names continue as Chiraag Patel aka ‘versutus’ was the player to bust in 5th place, taking away a prize of INR 4,29,000, while another top player in Nishant Sharma aka ‘nishant177’ won INR 3,30,000 for finishing 6th. Everyone knows Sharma as the man who produced India’s best result in the WSOP Main Event earlier this year.

Not only did WhySoSerious take home a huge sum of money from this tournament, but the player also topped the PPL Leaderboard, dethroning Amar Mehta aka ‘kidpoker0109’ who had the lead for three days. Keep reading GutshotMagazine.com for more updates from the PokerBaazi Premier League.