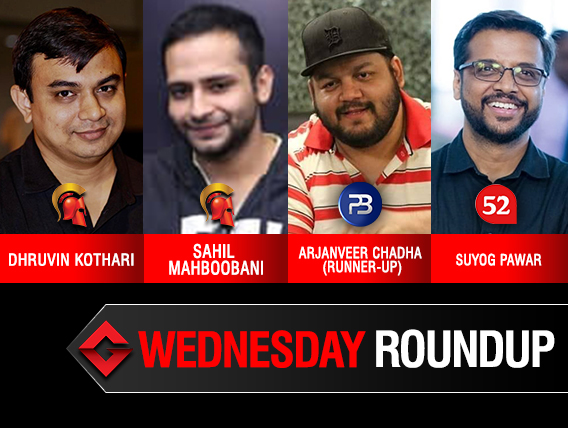 
The mid-week is here and the online felts are offering bigger guarantee tournaments as compared to the last two days. Spartan Poker hosted three feature tournaments including Destiny 13.0 which is famous for its Destiny SnG Finale where the top 3 winners receive the Las Vegas package. On the other hand, Wedesday was incredible on PokerBaazi, Adda52 and PokerStars’ that also concluded successfully. And here is a summary of yesterday night…

Wednesday night hosted Destiny INR 35 Lakhs GTD on Spartan Poker. Well, we all know by now that Destiny SnG Finale top 3 finishers win a Las Vegas package and the one to book his seat to the final round is the well-known circuit grinder and thr January version’s IOPC Millionaire Legends winner Dhruvin Kothari aka ‘thepokerplayer’. Kothari outlasted a field of 754 entries and grabbed the largest share from the massive prize pool after defeating ‘GoldSpot’ in heads-up.

Spartan Poker’s another feature tourney Dominator INR 6 Lakhs GTD was joined by 712 entrants. The advertised guarantee was surpassed, generating a bigger prize pool of INR 7.12 Lakhs which was shared among the top 31 places. Capturing the winner’s title was well-known circuit grinder, Sahil Mahboobani aka ‘ImHighIshove’ who defeated ‘royalking’ after hitting a straight on the river and claimed the first-place prize money!

PokerBaazi’s Wednesday flagship tourney The Pride INR 10 Lakhs GTD garnered a total of 417 entrants who paid INR 3,300 as buy-in. This was enough to create a larger prize pool of INR 12.51 Lakhs and top 54 players ended up earning a share from the same. Coming out on top was ‘deuceseven27’ who railed out online reg Arjanveer Chadha aka ‘holdbaby’ in heads-up to secure INR 2.51 Lakhs in prize money. Chadha seized the second place payout of INR 1.76 Lakhs.

One of the major attractions on Adda52 last night was Maverick INR 10 Lakhs GTD. Pulling out a total of 615 entries after each chipped in INR 2,500 this led to the creation of bigger prize pool of INR 13.99 Lakhs. Eventually, after few hours of intense grinding session, claiming the lion’s share was Suyog Pawar aka ‘suyog15’ who clinched to the first-place prize money of INR 2.73 Lakhs while his opponent Bhavyajeet Rathore aka ‘brbhavya’ settled in the runner-up position earning INR 2.46 Lakhs.

PokerStars’ Wednesday marquee Night on Stars INR 5 Lakhs GTD registered a total of 328 entries after paying INR 2,200. At 3:27 am, the last man standing was Ankit Saxena aka ‘Bhoochal’ who boosted his poker bankroll with INR 1.21 Lakhs in prize money. Saxena defeated ‘abraham-vegetaa’ in heads-up who settled in the runner-up position for INR 89,225.