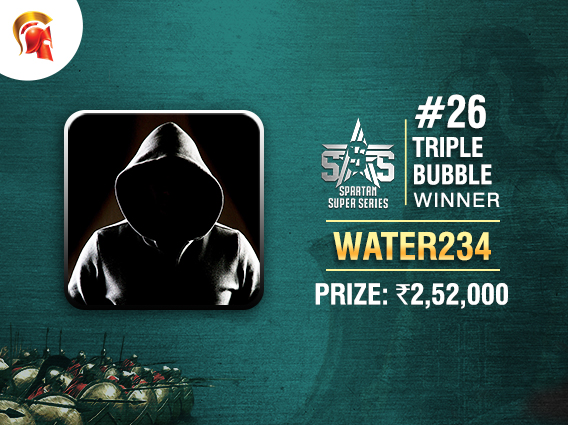 
The unique Triple Bubble tournament was added to The Spartan Poker’s featured tournaments not too long ago, and since then, it has been quite a hit on their platform, hosted every Friday at 9pm. Yesterday’s Triple Bubble was a part of the ongoing Spartan Super Series (SSS) and it had a bumped-up guarantee for the series.

SSS Event #26 Triple Bubble INR 12 Lakh GTD was the last scheduled tournament for SSS Day 5 and it attracted a field of 420 entries, even with the high buy-in of INR 3,300. The tournament guarantee was also slightly passed, creating a new prize pool of INR 12,60,000.

Here, the top 36 players were paid out a minimum cash prize of INR 8,190, but the player coming out on top of the entire field was ‘Water234’. He beat a tough field and was handsomely rewarded for it, taking home the mega top prize of INR 2.52 lakh. Finishing second in the tournament was none other than Akshay Nasa aka ‘sherlock52’, who won INR 1,76,400 for finishing second.

Also featuring on the final table was Ashish Kaushik aka ‘mmonas’ who finished 3rd for INR 1,19,070, after shipping SSS Event #17 just the previous night. Also making another deep run was Anirban Das aka ‘pokernoob’ who finished 4th, ending the day at #9 on the SSS Leaderboard. Arjanveer Singh aka ‘instrumental’ also finished in the money, who later that night shipped The Elite HR.

The specialty of this tournament is that it has three prize bubbles, so the money bubble player ‘bluffitbaby’ won back his/her buy-in to the tournament of INR 3,300. ‘Wadapav’ was the Final Table bubble player and he was awarded a ticket to next month’s Millionaire, while Nasa, the second-place finisher, won tickets to both The Millionaire and the Two of a Kind for October. 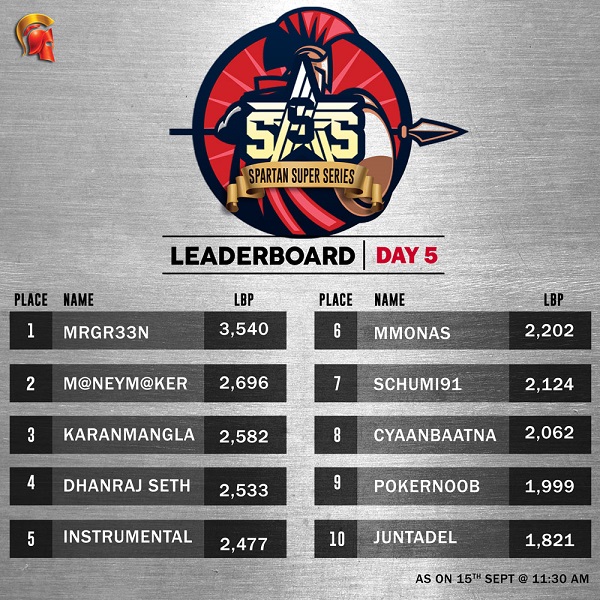 Keep reading GutshotMagazine.com for more updates on the Spartan Super Series and other major poker tournaments in India.