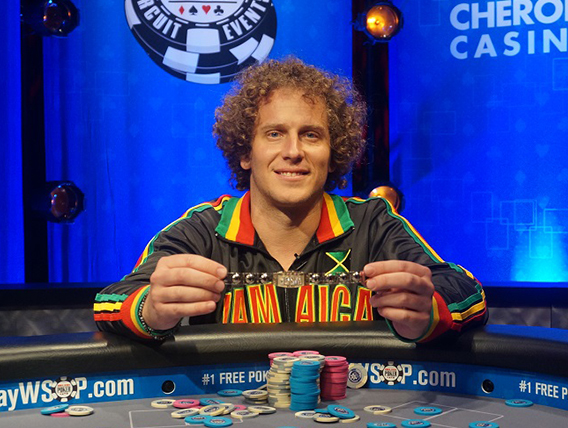 
Warren Sheaves was the last player to buy into the WSOP Circuit Global Casino Championship at Cherokee Casino in North Carolina. His strategy paid off. The gregarious Sheaves kept things light at every table he sat at, including the final table. When the dust settled, Sheaves was the last person still standing. He shipped a hefty score worth $282K and won his first bracelet. This year’s Global Casino Championship attracted 127 runners for the $10,000 buy-in event. The prize pool topped $1 million with most of the cheesecake paid out to the champion.

Warren Sheaves found himself at the final table that included Loni Harwood, Jeremy Meacham, Keven Stammen, Armin Stocker, Arkadiy Tsinis, Blake Whittington, Kurt Jewell and Steve Beirman. Beriman, Jewell, and Whittington were the first three out as they busted late on Day 2. Action ended on Day 2 with six left in the hunt. Jeremy Mecham held the lead, while Sheaves was 5/6 with only 30 bigs remaining.

Going into the final day with six remaining, Sheaves ramped up his happiness. Almost quite the opposite vibe of seriousness that blankets a final table. “That was my strategy. People play poker all day and I’m on vacation every single day of my life,” Sheaves said in his post-victory press conference. Day 3 belonged to Sheaves. He owned it. Arkadiy Tsinis busted early on Day 3, followed by Loni Harwood in fifth place.

The lone European at the table, Armin Stocker, busted in fourth place. Keven Stammen hit the rail in third place, which set up the heads-up battle between Jeremy Meacham and Sheaves. Jeremy Meacham couldn’t stop Sheaves. Meacham bowed out in second place, which paid out $174,360. Sheaves banked $282,113. Sheaves’ career winnings have passed a half-million bucks. The bracelet winner also has a Circuit ring in his possession. In October 2013, Sheaves won his first ring at an event outside Louisville. Soheb Porbandarwala bubbled the final table in tenth place.