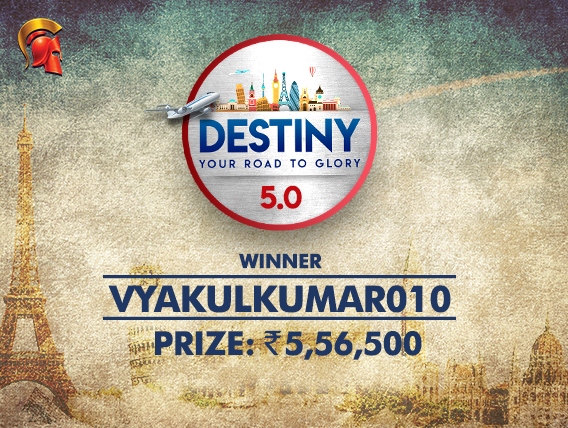 
Less than a couple of weeks back, The Spartan Poker announced the comeback of its signature tournament series called ‘Destiny’. Four successful series saw four players being awarded free package trips to the best gambling destination in the world – Las Vegas. Now, they are back with Destiny 5.0.

The fifth edition of Destiny will see 10 tournaments taking place over the course of 10 weeks and the winners of each will play in the Destiny SnG finale, where one winner will win a free package trip to Europe this time. The tournament takes place every Wednesday and Abhinav Iyer was the winner of the first Destiny that took place last week.

Coming into the final hand, ‘vyakulkumar010’ had a lead of nearly 3:1 over his opponent ‘Strangeplay’, as both players shoved all-in before the flop. Strangeplay had pocket tens and was ahead of vyakulkumar010’s A-6 when the flop opened K-6-J, and the turn opened 9. However, and Ace on the river gave vyakulkumar010 two pairs (Aces and Sixes) and that was enough to take down the pot and the second Destiny 5.0 tournament title.

The winner was unavailable to comment on his victory, but he will surely be excited, having additionally won an INR 1 lakh (deducted from winnings) seat into the Destiny SnG Finale. Final table results:

Keep reading GutshotMagazine.com for daily updates on poker tournaments from India as well as from around the world.