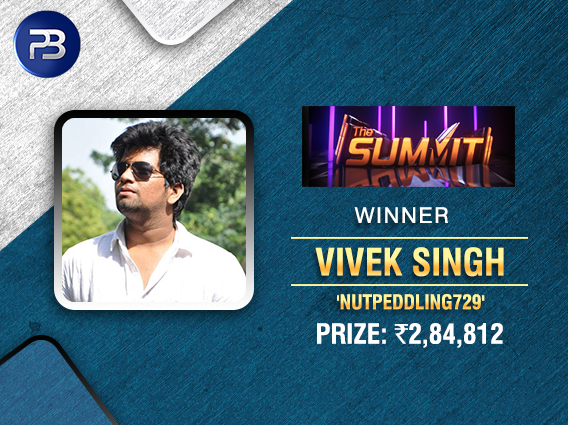 
Thursday nights are always good for poker players in India. All the major poker platforms in the country have high-value tournaments taking place and yesterday was no different. On PokerBaazi, there’s The Summit INR 10 lakh GTD tournament which takes place every Thursday night at 8pm.

It’s a very popular tournament and last night, the guarantee was broken once again. A total of 155 entries (78 players + 77 re-entries) registered to the INR 8,250 tournament, which created a new prize pool of INR 11,62,500. The high buy-in obviously implies that only the best in the country compete in this tournament.

The tournament went on for over 6 hours before it ended at 2:20am this morning. The player who dominated this field and took away the biggest prize of the night was Vivek Singh aka ‘Nutpeddling729’, who shipped this popular tournament and took away a massive pay-check of INR 2,84,812.

The top 13 players were paid out a min-cash of INR 29,062 and Singh won the biggest prize of them all. He beat a packed final table including Guneet Kwatra aka ‘guntz’ in heads-up, who won INR 2,15,062 for finishing second. Finishing third was Rubin Labroo aka ‘kornkid’ who is becoming a real champ in online poker now; he took away INR 1,56,937.

Gutshot caught up with Singh after this victory on PokerBaazi. He said, “I am obviously very very happy shipping The Summit on PokerBaazi and the experience playing on the new PokerBaazi software is really nice and different and much faster than it used to be. Would like to congratulate the team on it and ship many more tournaments on PokerBaazi.”