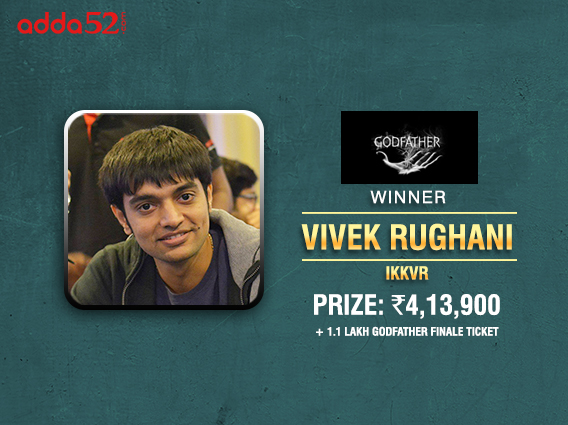 
The top poker companies are always searching for ways to reward their players and some of these companies gift the top players international poker packages. One such promotion is Adda52’s Godfather tournament series, which currently rewards the top player with an INR 10 lakh package to play poker at a prestigious poker festival in Europe.

After three successful seasons of the tournament, Godfather 4.0 is the current series taking place on Adda52, and this major tournament takes place each Thursday night at 8pm IST. It has a buy-in of INR 5,500 and a massive guarantee of INR 20 lakh, with the winner receiving a ticket to the INR 10 lakh Godfather Europe Finale.

Yesterday’s tournament witnessed a field of 403 entries that beat the guarantee slightly and created a new prize pool of INR 20,01,500. A total of 27 players were paid out a minimum cash of INR 12,090 and the player who took away top honours was none other than Vivek Rughani aka ‘ikkvr’, who has been on a hot run in the last couple of months.

Rughani bested this field to take home the top prize of INR 5,23,900, of which INR 1.1 lakh will be deducted as an entry to the Godfather 4.0 Europe SnG Finale, where the winners of 9 Godfather tournaments will compete in a winner-takes-all SnG, for a chance to fly to Europe.

Rughani has been making several final tables and runners-up finishes in tournaments on Spartan and other online websites, including a second-place finish in the SSS Elite tournament, for which he won over eight lakh rupees. He also made headlines last month for an extremely impressive 88th place finish in the 2018 WSOP Main Event.

In this particular Godfather tournament, he beat ‘ninjago’ in heads-up, who took away INR 3,32,475 for finishing second. The Europe SnG will take place on 2nd September 2018 on Adda52, and Rughani will now be preparing for that Finale, to add another international trip to his poker CV.

Keep reading GutshotMagazine.com for more updates on the Godfather tournament series on Adda52.