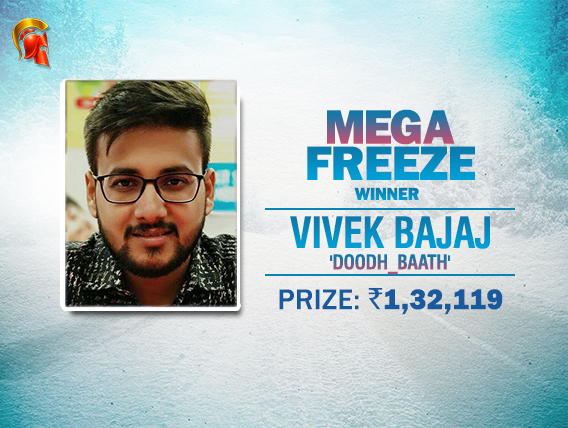 
Freezeout tournaments is the most preferred format of poker for many of the top players across the country, with players unable to return once they bust their stacks. This avoids all the unnecessary shoving that takes place especially at the start of other tournaments.

Most of the top poker companies host freezeout tournaments a few times each week and on The Spartan Poker, the Mega Freeze INR 6 lakh GTD is a featured tournament that is contested every Monday night in the freezeout format. Yesterday was another edition where Vivek Bajaj made a stunning comeback from being ranked 49/50 in stacks to winning the tournament after a heads-up deal.

Bajaj plays under the name ‘doodh_baath’ on Spartan and he has won there in the past, shipping an SSS title in September this year. This however, would’ve been a much sweeter victory as he returned from a very low stack to take down the title, while also winning the top cash prize of INR 1,32,119.

In the final hand of 3-way play, ‘Jeevan123’ went all-in pre-flop with pocket Sevens, Vivek Bajaj made the call with pocket Aces and the board opened Qs 7h Qc 4c Qd. Both players hit a full house, but Bajaj won with Aces full of Queens, before the latter immediately agreed to a deal with Crimemastergogo in heads-up.

Gutshot caught up with Bajaj to ask him about this victory and he said, “The experience was really very nice. I’ve been playing my A-game lately, and more often than not, I’ve got a good start, but wasn’t able to capitalize. Yesterday was the day, I played super solid. I was once 49/50 in the rankings and from there, fought back hard. We chopped the tournament in heads-up and this big score was long due from me. Also, I would like to thank Vikram Singh aka Prison Mike for helping me learn the game, and also Sanjay Taneja Sir for some last moment rails.”

Keep reading GutshotMagazine.com for more updates on the daily Spartan featured tournaments, and other tournaments from around the world.