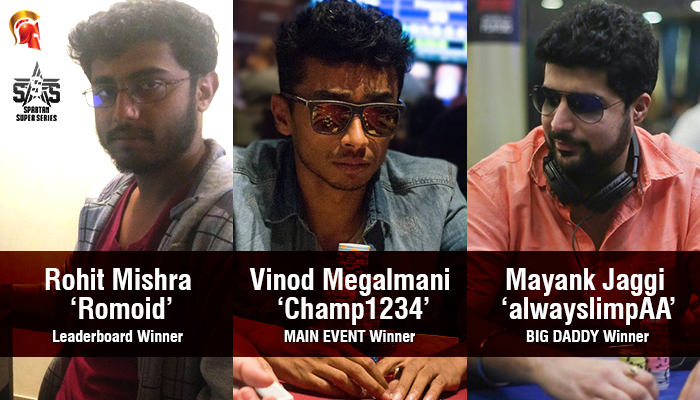 
The much-awaited Spartan Super Series kicked off on 11th June 2018, and over INR 4 crore in guaranteed prizes were up for grabs, to go with the INR 15 lakh being given away for the SSS Leaderboard. Yesterday was the final day of the series, with the Main Event being the highlight of the day.

Vinod Megalmani won the Main Event while it was ‘Romoid’ (Rohit Mishra) who won the SSS Leaderboard at the end of these seven days of intense grinding on The Spartan Poker. Mishra’s win in the first event of the final day helped him emerge victorious on the leaderboard.

Here’s a run through of what took place on the final day:

This INR 550 buy-in event is what helped Rohit Mishra aka ‘Romoid’ to secure vital points to the SSS Leaderboard, which he ultimately won. He shipped this tournament, beating a total of 501 entries and ‘kozmos93’ in heads-up, where his Ace-pair was superior to his opponent’s 9-pair. A total of 39 players were paid out in this event with a minimum cash prize of INR 2,070, and Romoid won INR 60,150.

Chiraag Patel is another popular name on the online poker circuit and he shipped the second tournament of the final day of June’s SSS. Playing under the username ‘Drunkenf1st’, he beat 187 entries to ship this tournament that had a buy-in of INR 1,100 and take away winnings of INR 44,300.

He was up against ‘babadookdook’ in heads-up, with a huge chip lead coming into what became the final hand. This is what forced babadookdook to make the all-in call, but his pair of sevens turned out to be no match for Patel’s two pairs (Aces and Sevens), settling for the second-place prize of INR 29,900.

This was one of the highlight tournaments of the day, a tournament that takes place every Sunday on The Spartan Poker and the winner takes home a free package trip to play in the Big Daddy Casino in Goa, in addition to his tournament winnings. 964 entries were recorded and eventually, Mayank Jaggi emerged victorious for INR 1,91,900. Read more about this big tournament win here.

The tournament that everyone was waiting for was the mega Main Event, that had a guaranteed prize pool of INR 80 lakh. The INR 11,000 tournament saw a total field of 713 entries, of which the top 71 players were paid out a minimum cash prize of INR 30,400. Vinod Megalmani was the eventual champion, justifying his ‘Champ1234’ username and he took home a massive INR 15,44,000 for this win.

He has been a regular face in live poker tournaments in India and abroad too, and now has a big win online as well. He hit a straight in the final hand to beat ‘GTOExploited’, who had two pairs. Remember, GTOExploited also shipped the DareDevil tournament on SSS Day 6 for INR 3,21,000.

Gutshot spoke to Megalmani after this win. He said, “This is the first ‘Main Event’ I’ve shipped so it feels great. I haven’t told my family as yet but my friends are very happy. I’m planning to go out on a holiday with the prize money I’ve won.” When asked about tournament’s on Spartan, he said, “The SSS has always been a great series. I’ve always done really well there and the structures are also really good.”

The SuperStack is one of The Spartan Poker‘s featured tournaments, being played every Sunday at 7:30 pm IST. Finishing at nearly 4 am today morning, the tournament was brilliantly contested between the 533 registered entries, of which 50 players were paid out a minimum cash of INR 13,325.

‘tathagat’ topped this field and took home a massive prize of INR 6,92,900, after having beaten ‘fake news’ in heads-up, who took away INR 4,26,400 for the runners up prize. Both were neck to neck in chips before the final hand, and ‘fake news’ went all-in with nothing but a pair of tens on board. However, this was a huge bluff and his bluff was caught out by his opponent, who had hit a straight on the flop itself.

This INR 1,100 tournament was the final event of the day and the final event of June’s SSS series as well. 499 total entries were registered and ‘Ankkiii’ was the eventual champion, winning slightly over a lakh rupees for beating ‘YoulimpIsqueeze’ in the heads-up battle. Once again, both players weren’t far apart in the chip counts before the final hand, where YoulimpIsqueeze hit an Ace-high flush but still lost, as Ankkiii hit a full house on the river.

The SSS Leaderboard had INR 15 lakh on offer and the top prize of INR 5 lakh went to Rohit Mishra aka ‘Romoid’ who accumulated the most points during the seven days of the tournament series. His consistency has been visible over the last month or so, also winning a DareDevil tournament towards the end of May 2018. 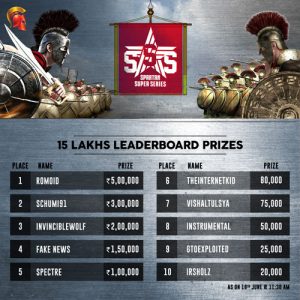 Keep reading GutshotMagazine.com for daily reports on the top poker tournaments from India and around the world.