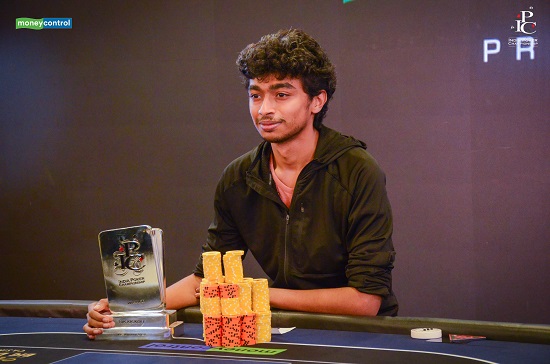 Vinod Megalmani on winning his first Indian title at IPC


Born and brought up in Bangalore, Vinod Megalmani completed a degree in Computer Application before deciding poker was the career path for him. He was only 23 at the time and he didn’t hesitate at all before choosing this profession.

He knows the ups and downs of the game well, and he’s grown to be a much-feared player, both live as well as on the virtual felts. “I always loved playing games and once I got into poker, I knew that this is what I wanted to do. The freedom that poker gives you, there’s no job like it,” he said to us about his decision to start playing poker many years ago.

There’s plenty of travelling in the life of a poker pro and Megalmani has several live cashes in places like Manila, Macau, Vietnam, Las Vegas, Australia and of course India. While he’s managed a few bigger scores, he didn’t have a major live title until last month at the India Poker Championship (IPC) in Goa.

He got on board the Big Daddy Casino and registered to the 10k Kickoff Event which had 315 entries including some of the best names in Indian poker. However, he didn’t seem perturbed about that, and went on to ship the tournament for his first domestic title and INR 6,73,600 in prize money.

Hi Vinod, when you registered to the IPC Kickoff, did you think you’d end up shipping it?

Of course. For me, every single tournament that I play either online or live, I assume that I’ve already won it.

At what point did you think you can go on to win it? Who were your toughest competitors?

When there were around 100 players left, I had 5% of chips in play and when 50 were left, I had 10% tournament chips, so I kept myself in the game since a while and fancied my chances right through. China’s Patrick Liang had a lot of experience, so I was kind of worried about him but luckily, I always picked up hands against him. And what can I say about Siddharth Mundada? He’s a beast! He won the Kickoff in Sep 2019, was runner-up here and he FT’ed the Main Event also.

Your opinion on the India Poker Championship?

They’ve always been the pioneers in Indian poker, and they have a great team. It was my first time to the Big Daddy Casino as well so overall, I had a great experience and will definitely be coming back for the next edition of the IPC.

Talks of a deal did come up in this tournament too once we were down to 3-handed play with Mundada and Liang. At this stage, I had approximately 50% of the chips in play and in these positions, you simply can’t make deals.

What was your reaction after taking down the title? How did you celebrate that night?

I was delighted but my immediate reaction was ‘Why did it have to be the smallest tournament of the series?!’ Haha. However, a win is a win and I’ll take it happily. I celebrated by punting the 100k Highroller lol.

See more of what he had to say when he spoke to Gutshot after the victory:

Like a true poker player, Megalmani reinvested most of his winnings into poker while also buying some Bitcoin. He’s been doing brilliantly on the virtual felts and we won’t be surprised if this is the first of many IPC and other tournament wins to come. Till then, stay tuned to GutshotMagazine.com for updates from the poker industry and interviews with the top winners.