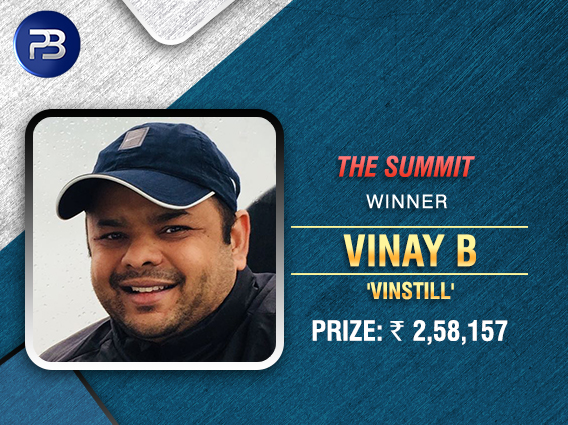 Vinay B is latest to scale The Summit on PokerBaazi


The Summit MonsterStack Turbo INR 10 lakh GTD is easily one of PokerBaazi’s most popular online poker tournaments, played once a week and the guarantee being passed in nearly every edition. Let’s not forget that a popular tournament also means that a lot of known pros will be a part of the competition, and scaling this Summit is never easy.

The tournament is played every Thursday night and yesterday, it kicked off at its usual scheduled time of 8pm, with a total field of 153 entries joining the competition, with each entry costing INR 8,250. Once again, the guarantee was broken, with a new prize pool of INR 11.47 lakh being generated.

Like we said, the competition is always tough and yesterday too, a lot of known players not just participated, but also finished in the money and on the Final Table. 19 players shared this prize pool with a minimum cash prize of INR 15,491 each and among those who took home small prizes were Anirban Das aka ‘pottysingh’ (17th), Rajesh Shukla aka ‘intervntion’ (16th) and Sagar Choudhury aka ‘sagarpupul’ (13th).

An already tough tournament then got even tougher as a number of PokerBaazi regulars reached the Final Table, including Neeraj Kumar aka ‘SelfClaimedPro’, who missed a 6-figure cash by busting in 5th place. Vinay Choudhry aka ‘Lovecee’ also had a brilliant run on the night, eventually hitting the rail in 3rd place fort a good score of INR 1.43 lakh.

From there, it was an intense battle between Sahil Mahboobani aka ‘ImHighIShove’ and Vinay B aka ‘Vinstill’ – both very accomplished players in the Indian poker industry. However, only one can end victorious and last night, that player was Vinay B, who won and took away the top prize of INR 2,58,187.

It was nearly a 7-hour grind that ended at 2:46am this morning and Vinay would’ve been mighty proud of his accomplishment, coming back from 9/9 to ship the tournament. Mahboobani also collected a handsome prize of INR 1,86,468 and it would’ve been a nice way to celebrate Diwali for these two players.

Gutshot caught up with Vinay after this victory. He said, “Winning tournaments on PokerBaazi is always special as the structures are very good and the field is generally tough. Deepstack structured events are always fascinating to play! We reached the FT with a very short stack of 9BB and were placed last at that time but didn’t lose patience and picked up spots to keep the stack going. Once we doubled up, we kept the momentum going till the end! It was a very satisfying win and finish.”