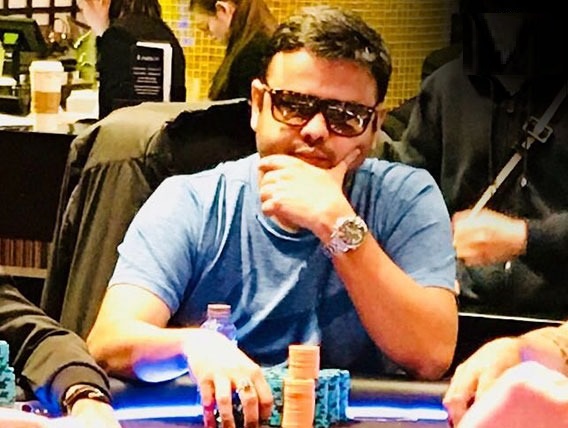 Vinay B a.k.a Minimalist wins Daredevil


It seems the weekend action on The Spartan Poker is a particular favourite with some regs. Barely a week after taking down the Elite tournament, Vinay B from Bengaluru who plays under the handle ‘Minimalist’ scored another title at last night’s feature tournament, the Daredevil. This tournament which took place a 7:30pm on Saturday evening, saw 91 players take part. A unique aspect of this tournament is that in case a player gets usted out, they get to re-buy at a 50% discount on the original buy-in of INR 4,400. So that’s INR 2,000 (as there is no entry fee on the rebuy).

The eventual player pool took the place past its 6 Lakhs GTD mark to settle at INR 6,08,000 which would be shared among the top 13 finishers of the event with min-payout being INR 12,464. After ‘JAI GURU JI’s’ elimination in 5th place, the action went on for a couple of hands before this last hand played out. In pre-flop action ‘Laughing Buddha’ raised 25,000 with the blinds at 5,000/10,000 ante 1,000 in Level 31. ‘JesusOnAcid’ holding pocket Tens popped it up to 65,000 and that was enough to get the others including the initial raiser to fold. The players then worked out a deal whereby the remaining players would be paid out as per ICM.

That lead to Vinay B to scoring this title and INR 1,18,190 for his first place finish while runner-up Laughing Buddha took home INR 1,11,719. JesusonAcid (INR 96,889) and nivesh26 with INR 76,609 rounded off the top 4 spots who made the deal. A quick word about Minimalist’s performance with regard to the Hot Leaderboard Challenge at The Spartan Poker. With 2,137 points, Minimalist is top of the rankings although ‘ThePokerRaja’ (2,063) is close behind and another winner of this Daredevil tournament, last week’s edition as a matter of fact, BigggTymeR completes the top 3 with 1,601 points.

Stay tuned to Gutshot as we will bring you an update on all these featured tournaments as well as a roundup of Week 2 of the Leaderboard challenge.