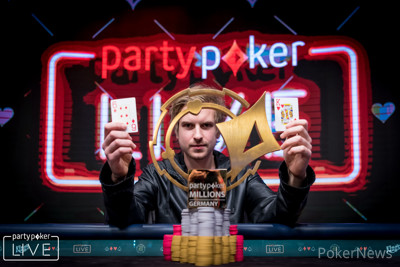 
The partypoker LIVE MILLIONS Germany festival kicked off on 8th February and has finally come to an end on 18th February, with the Main Event being won by Sweden’s Viktor Blom, for €850,000. Many events ended on the final day, including the €5,300 Main Event, which was the highlight of the inaugural MILLIONS Germany series.

A total of 1,022 entries were recorded across the several days of the Main Event, but only 13 survivors went through to the final day. Brazil’s Joao Simao, in particular, had a very good outing at the Kings Casino in Rozvadov. He finished 2nd in the first €25k high roller, followed in up with a 4th place finish in the second €25k high roller and then finished 4th in the Main Event, earning €280,000 – the highest live cash of his career.

Coming back to Blom, he wasn’t in a very good position going in to heads up with Moldova’s Pavel Plesuv. The latter held a 9:1 lead at one stage, only for Blom to fight back hard and level up after doubling up thrice. He then called with K-6 in hand #242, beating his opponent’s Q-pair with a K-pair and securing the title and the top prize of €850,000. The two players cut a deal before heads up, to get €750,000 each and an extra €100,000 to the winner.

Blom, known by the username ‘Isildur1’ online, was introduced to poker at an early age of 14 and even though he hasn’t played a lot of live poker over the years, he is an online legend, with $1,271,490 in online earnings over last year’s summer. This Main Event win at the MILLIONS Germany turned out to be Blom’s second highest live cash, after $1,254,400 he won at PCA 2012.

For similar results of poker tournaments from around the world, keep following GutshotMagazine.com!