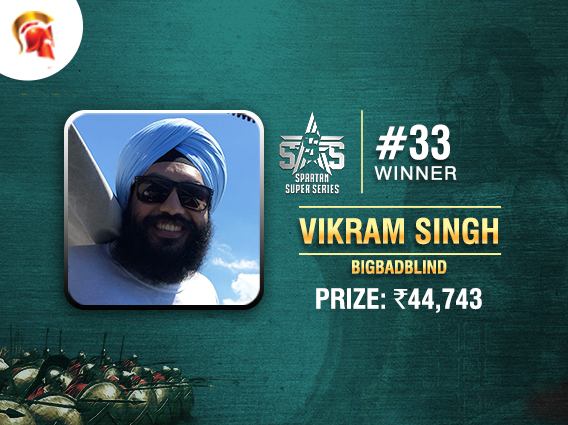 
Poker players all over India would’ve been extremely excited yesterday, as The Spartan Poker had quite a few big tournaments being hosted as a part of the Spartan Super Series (SSS), a series which offered over INR 3.7 crore in guaranteed prizes and which concluded yesterday.

The first tournament of the day had a noon start, and this tournament was shipped by ‘Viserion’. A couple of hours later, SSS Event #33 INR 2 Lakh GTD kicked off at 2pm, a freezeout tournament with a buy-in of INR 1,100. The tournament saw a total field of 202 entries and this led to the guarantee being beaten slightly.

As the tournament progressed, the top 27 players were paid out a minimum cash of INR 2,020, but none took home a greater prize than Vikram Singh aka ‘BigBadBlind’, who outlasted this vast field and made a decent addition to his poker bankroll, winning INR 44,743 for finishing first.

He beat ‘RippingAA’ in heads-up, who had to settle for the runners-up prize of INR 30,199. For those who remember the recent IOPC series, you would’ve heard a lot of this player, having made several final tables and also winning an IOPC title, shipping the IOPC Daredevil tournament for nearly four lakh rupees.

Singh is a highly accomplished poker player, with many huge wins on online poker websites, both Indian and international. He studies the game in depth and has also written a ‘Poker Gyaan’ article on Gutshot, titled ‘Quality vs Outcome’, which you can read here.