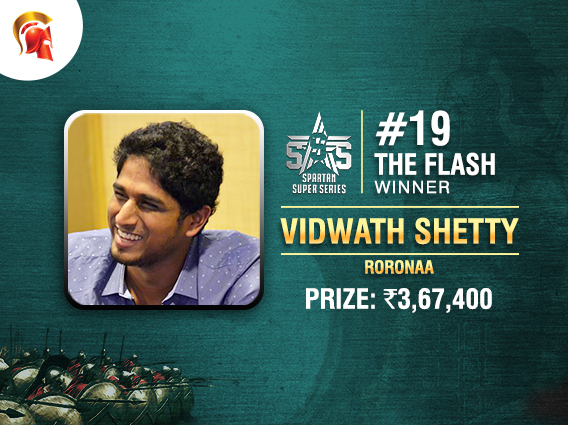 
There are some online poker tournaments that players look forward to playing in each week, and one such tournament is The Flash that is played every Thursday night on The Spartan Poker. There was fierce competition in this tournament last night, being a part of the ongoing Spartan Super Series (SSS).

SSS Event #19 The Flash INR 12.5 Lakh GTD kicked off at 7:30pm last evening, with a buy-in of INR 5,500. With all the excitement around the SSS, the guarantee was beaten once again, and a new prize pool of INR 16.7 lakh was generated, due to a 334-entry strong field registering to the tournament.

Coming out on top of this field was none other than Vidwath Shetty aka ‘RoronaA’, who has been having a great run in online poker at the moment. Just last month, Shetty won a couple of titles in the India Online Poker Championship (IOPC) and finished high on the IOPC Leaderboard as well.

The player is a popular name in the poker industry, having also shipped a live tournament at the recent Baadshah Gaming Live in Goa. Here, he made a big addition of INR 3,67,400 to his poker bankroll. He beat ‘robnoxious’ in heads-up, who also claimed a handsome prize of INR 2,48,830.

Shetty was dealt Qc 8d and robnoxious held 4d 3h as both players went all-in after seeing the flop open 4h 7d 8s. robnoxous had a pair of Fours but was trailing Shetty’s pair of Eights. The next two cards opened 8c Kc and Shetty completed Three of a Kind Eights to win the pot and The Flash title on Spartan.