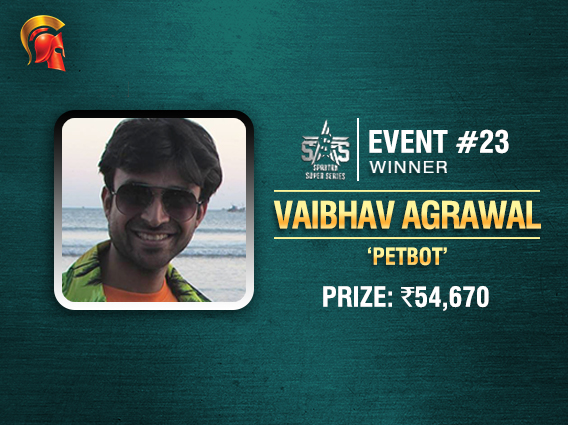 
The fifth day of the ongoing Spartan Super Series (SSS) was played out on The Spartan Poker yesterday and everyone would’ve wanted to get their hands on some of the biggest prizes of the day, with the competition becoming very tight on the SSS Leaderboard, where INR 10 lakh is being given away to the top performers of the series.

SSS Event #23 INR 2.4 Lakh GTD was one of the smaller SSS tournaments scheduled for the day before the bigger tournaments kicked off later in the day. It was an INR 770 re-entry tournament and the guarantee was beaten with a field of 355 entries registering at the end of the registration period.

The prize pool of INR 2,48,500 was shared by the top 27 players with a min-cash of INR 2,236. Outlasting all of these entries and taking away the top prize of the night was Vaibhav Agrawal aka ‘petbot’, a regular player on Spartan. He’s had a few runners-up finishes but has now claimed a major title as well.

PooreSeAa was dealt 7d Kh and decided to go all-in pre-flop, which was called in no time by Agrawal, who was dealt a strong hand of Ac Qd. The players revealed their cards and the board opened Qc 4s 8s 3s 6s, which saw Agrawal hitting a pair of Queens on the flop and that was enough for him to beat his opponent and claim a prestigious SSS title on The Spartan Poker.

Gutshot caught up with Agrawal after this victory. The 29-year old B-Tech graduate was first introduced to poker back in 2011. He started taking it seriously in 2015 when he moved to Bengaluru. He used to have long weekend home sessions and on the week days, he would play online. He gradually improved his game leveraging the online resources and with constant hand reviews with his friend, Deepak ‘definate’ Choudhary.

Talking about the tournament, he said, “The event in itself was pretty usual for me, grinding my way close to the ITM and surviving the bubble. Post ITM, I got lucky in catching some cards and picking up some spots to chip up and make my way to the Final Table. It was then when I crawled my way to 6/6, then I got A5, AA, KK and in 3 hands I doubled up each time, stacking up 10x to 1/5. Moving from there to heads-up was majorly small ball. With 1:2.5 chip advantage, I opened AQ and the opponent 3-bet shoved with K7 and I managed to hold.”

“I really love the tournament structure on The Spartan Poker, especially on the FT that every player reaches with decent bb stacks. It’s thrilling to have shipped a mid-level tournament. I continue to work on my game and level up with each passing day. Shout out to Anant (Pro) and Anirban (pokernoob) for fine tuning my game,” he said, talking about tournaments on Spartan.

Keep reading GutshotMagazine.com for more updates on the biggest and best poker tournaments in India.