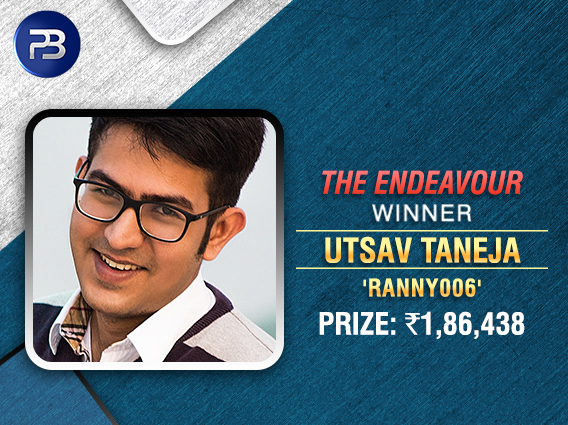 Utsav Taneja is the latest Endeavour champ on PokerBaazi


Featured tournaments take place on PokerBaazi daily and for Tuesday nights, they have The Endeavour INR 10 lakh GTD lined up at 8pm once a week. You might even call this their most popular featured tournament as India’s top pros register each week and the guarantee is almost always beaten.

This Tuesday night, the tournament kicked off at its scheduled time and a total of 386 entries registered to play, each producing the buy-in of INR 3,850. Of course, this led to another crushed guarantee on PokerBaazi, with the prize pool being inflated to INR 13.5 lakh, which was eventually shared among the top 53 places.

These tournaments generally see tough fields, but it seemed like nothing was tough enough for Utsav Taneja aka ‘ranny006’ on Tuesday night, as he bested the field and shipped this major tournament, taking home all the glory as well as the top prize of INR 1,86,438.

Taneja beat another PokerBaazi regular ‘SHIVSHAKTI’ in heads-up, who collected INR 1,41,855 for finishing second and ‘TheTeacher’ rounded up the 6-figure scorers in this tournament, taking home a pay-check of INR 1,07,404 for finishing in third place.

For those who play across all major platforms, you will know that Taneja hasn’t won a huge online title for the first time in his life, even though it was his maiden featured tournament victory on PokerBaazi. Just last month, he and Sahil Rajwani shipped the 2.o.K on Spartan and picked up massive scores of INR 15 lakh each. Gutshot then conducted a complete interview with Taneja to know more about the player.

Just 24 years of age currently, Taneja is living the dream, with plenty of big cashes to his name already. We caught up with the player after he won The Endeavour and he said, “It was my first win in a featured tournament on PokerBaazi. I was chip leader throughout and the structure was nice. I had 30BB average on the Final Table which gave room for a lot of poker, unlike a shallow FT where a whole lot of push/fold stacks is seen.”

For more similar updates on India’s biggest poker tournaments as well as interviews with the winners of these tournaments, keep reading GutshotMagazine.com.