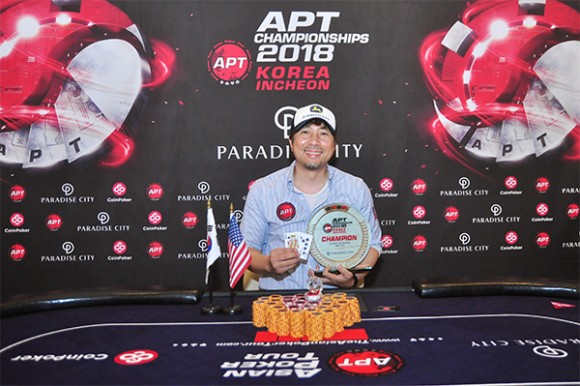 Jaepil You had a dream run on Day 1 of the tournament as he had the largest stack by the end of it, Day 2 was a bit harsh as You bled chips but Day 3 saw him making it to the final 8 with the 3rd largest stack on the final table just behind Tamon Nakamura at the number 2 spot and the hot running chip leader Hideki Izutsu.

With a final table ran for a total of 130 hands out of which 50 were played heads-up, making it a memorable game to witness. The stack leader Hideki Izutsu lost the opening hand to Nakamura who gained a quick lead over the rest of the 7 players. In just a few hands, Tae Hoon Han risked it all with another short-stacked player Hyun Kyun Bae and lost with Qd 6s dominated by Qh Jc the entire spread. Next to go, despite of a stack boost from Tae Hoon Han, was Hyun Kyun Bae. In 6th position was Naoki Moitra, while You then eliminated Hiroyuki Yoshimura with As Jc against Td Th. Next in line was Hung Sheng Lin, eyeing his second APT win, leaving us with the top 3.

You had the smallest stack amongst the three but some aggressive poker and 31 hands after he managed to eliminate Izutsu in 3rd place with 9c 9s against Kc Js while the board read 2s 9d Jh 8h Ad, taking it to 50 hands of intense, aggressive, nail biting heads up poker. Heads up poker began with You leading the chip count with 4.1M and Nakamura had 3.3M. Jaepil dominated and won most of the hands that brought Nakamura down to 1.4M but Nakamura got a double up with A-Q over Q-10.

You wasn’t backing down and continued attacking Nakamura with aggressive poker and soon, Nakarmura was left with just 835K. Nakamura doubled up twice and made it to the 2.4M mark but his rise was short lived as You shaved him down again and then came the final hand #50 with blinds at 30K-60 ante 60k. You raised to 205k, Nakamura called. At the flop 9h Qs 4d, Nakamura check-called You’s 300k bet. On the Kd turn, Nakamura check-raised all in and You called. You had Kc 10s top pair and Nakamura with Jd 6d draw. The river As was no help to Nakamura and was eliminated in 2nd place and a well-deserved win by Jaepil You saw him clinch his first ever live international tournament title.