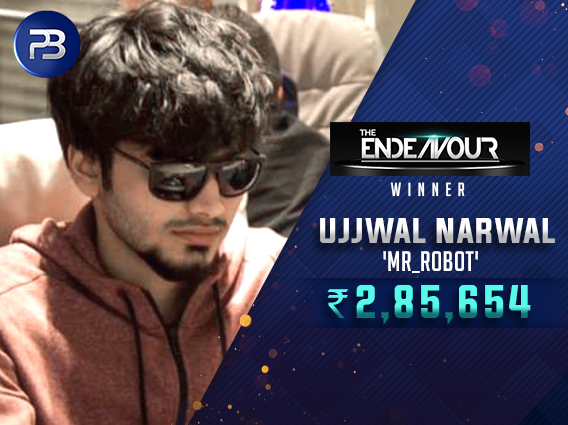 
PokerBaazi is one of the companies helming the online poker market in India. They recently hosted the Game Changer INR 2 Cores GTD. The guaranteed prize pool was the biggest this country has ever seen on virtual felts. The community was so enthralled by the prospect of playing THE biggest tournament that they collectively crushed the guarantee by an awesome margin of ~INR 1.77 Crores.

They also host some of the most popular weekly feature tournaments and among those is The Endeavour INR 15 Lakhs GTD which was hosted yesterday, a Tuesday. The tournament began at 8 pm sharp and was in the books by 3.11 am today morning. 458 total entries (including 199 re-entries) were made in the event and saw the top 77 places being paid (min-cash of INR 6,251) on PokerBaazi.

Overcoming the 7+ hour grind and claiming the top place was regular Ujjwal Narwal aka ‘Mr_Robot’ for INR 2,85,654. He beat ‘Pinin4theFjords’ in heads-up to secure his victory. The runner-up settled for the second-place cash prize of INR 2,00,855. Narwal’s grind must’ve been a tough one since the player pool consisted of many top pros and regular grinders.

Narwal, a regular online grinder, has played many tournaments in the past and cashed in them too. Among his wins is Adda52 Whale title which he bagged last November. He is a young and budding poker player and this Endeavour win last night will surely prove beneficial to him in coming months.

Keep reading GutshotMagazine.com for more such tournament updates from the Indian scene as well as for general poker news from around the world.