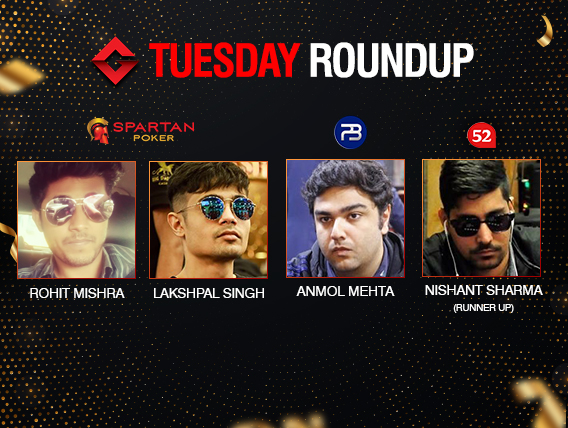 
The action on the virtual felts continues after government announced a 21-days lockdown. With players citizens isolating themselves and grinding online meaning that most of the marquee events surpassed their advertised guarantee which was exactly the scenario yesterday. Spartan Poker’s Tuesday popular Mega Stack came with INR 30 Lakhs GTD, on PokerBaazi The Endeavour promised INR 15 Lakhs, Hitman and Sixth Sense on Adda52 and PokerStars assured INR 10 Lakhs GTD respectively. And here is a complete summary of Tuesday majors…

Spartan Poker’s Tuesday headliner was Mega Stack INR 30 Lakhs GTD attracting a massive number of 1,213 runners after each one paid INR 3,300. This number was enough to crush the advertised guarantee and generate INR 36.39 Lakhs in prize pool which was shared among the top 111 places and each player walked out with at least a min-cash. Riding past the field was Rohit Mishra aka ‘ShippingYard’ who seized the winner’s title along with a hefty prize money after defeating Chirag Bhardwaj aka ‘Sa$sY_ThaT’ in heads-up with his higher two pairs of QQ22 over his opponent’s JJ22.

After paying a buy-in of INR 1,650 a total of 968 hopefuls joined the field of The Race INR 10 Lakhs GTD on Spartan Poker. The tournament began at 9:30 pm and gradually collected INR 14.52 Lakhs in prize pool and the top 79 places locked a min-cash. Taking away the largest portion of the same was circuit popular Lakshpal Singh aka ‘LuckyBhai$’ who captured the first-place prize money while his opponent ‘riverismine’ settled in the runner-up position after the players struck a heads-up deal.

A total of 633 entrants pounced on the field of The Endeavour INR 15 Lakhs GTD on PokerBaazi. Each entry paid INR 3,850 as buy-in amount which led to the collection of INR 22.15 Lakhs in prize pool, smashing the promised guarantee. After 8+ hours of intense grinding, Anmol Mehta aka ‘anzzzz’ came out on top and added INR 4.18 Lakhs in prize pool defeating his opponent Vinay Rajpal aka ‘vinay09’ in heads-up who settled in the second place for INR 2.93 Lakhs.

Adda52 hosted Hitman INR 10 Lakhs GTD which caught the attention of a pretty good field that led to the creation of INR 13.28 Lakhs in prize pool. Topping the list and claiming the day was an Aman Bhadu aka ‘zontory’ who seized INR 3.29 Lakhs along with 10 bounties on his way while his opponent Nishant Sharma aka ‘DoJingBULLETS’ ended up earning INR 1.99 Lakhs in prize money.

PokerStars’ Sixth Sense INR 10 Lakhs GTD attracted a field of 382 entries after each one paid INR 3,300 eventually creating INR 11.46 Lakhs in prize pool. The top 71 places earned a share from the same and the one to capture the first-place prize money was ‘turbulentvein’ after the players settled for a heads-up deal that saw ‘spinnnerr’ in the runner-up position.