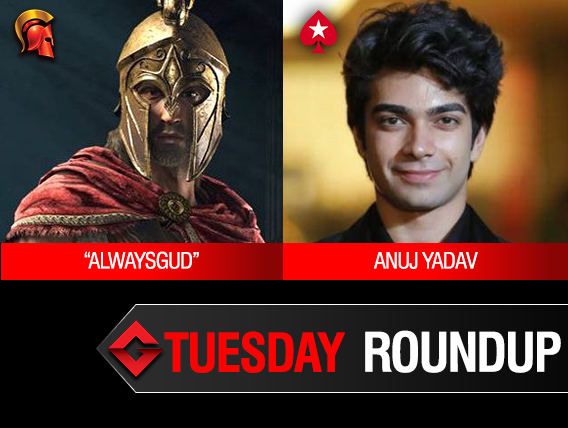 
Two-days into the new week and guarantees are already escalating! Tuesday night picked up the pace with some of the renowned players topping the list. On the other hand, the online platforms keep the thrill on-going with Spartan Poker, as usual, putting down the highest guarantee of INR 20 Lakhs GTD, Endeavour on PokerBaazi flaunted 15 Lakhs. So, let’s take a quick tour of Tuesday majors…

Spartan Poker’s flagship event Mega Stack INR 20 Lakhs GTD commenced at 8 pm sharp pulling out a total of 758 runners, with each one paying a fixed buy-in of INR 3,300. Eventually, this recorded number crushed the guarantee, generating INR 22.74 Lakhs prize pool that was later shared among the top 71 finishers. But the one to take away the largest chunk of the same was an anonymous player ‘alwaysgud’ after the players decided to settle for a heads-up deal. ‘alwaysgud’ with his stack of 8.38 million pushed away ‘Richie4ich’ in the runner-up position.

Navdeep Sahi aka ‘Psychonaut’ took down The Endeavour INR 15 Lakhs GTD on PokerBaazi outlasting a field of 424 entries. For a buy-in of INR 3,850, the prize pool was created, and the top runners benefited from the same. Sahi captured the title along with INR 3 Lakhs as the first-place prize money after defeating Pranay Chawla aka ‘setmeup’ in heads-up. Chawla gradually walked out with INR 2.11 Lakhs for settling in the runner-up position.

A bounty tournament, Hitman INR 7 Lakhs GTD on Adda52 appeared with a fixed buy-in of INR 3,500. The flagship event attracted a total of 24 players, all of whom finished in the money, strolling out with a min-cash. After the dust had settled it was Uttam Kumar Sinha aka ‘chinunew’ who railed out Anurag Srivastava aka ‘NormanBates’ in the runner-up position to seize the winner’s prize money of INR 2.21 Lakhs. Srivastava managed to bag INR 1.23 Lakhs.

Sixth Sense INR 12 Lakhs GTD was a part of the Winter Series on PokerStars attracting a pretty decent field of 356 entries with each one paying INR 3,300 buy-in. After 7+ hours of intense grinding and when the dust had finally settled, Anuj Yadav aka ‘brockLesnar95’ was announced the official titleholder to capture the winner’s prize of INR 2.10 Lakhs. Yadav eliminated Arsh Grover aka ‘BiggggTymeR’ in heads-up who added INR 1.49 Lakh into his poker bankroll.