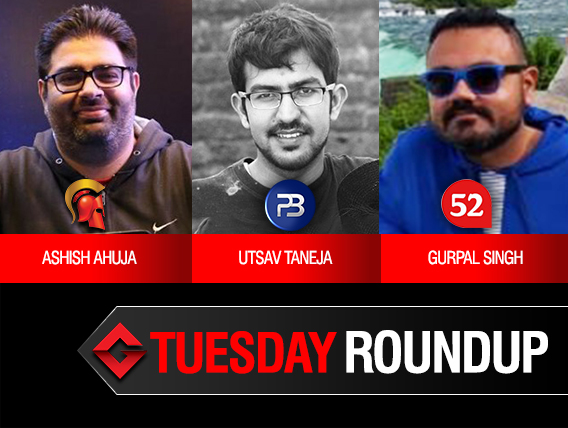 Tuesday is reserved for Mega Stack INR 20 Lakhs GTD on Spartan Poker and last night attracted a total of 716 entries with each one paying INR 3,300. The tournament blew past its advertised guarantee to collect INR 21.48 Lakhs in prize pool. Racing ahead of the rest was a well-known figure in the industry Ashish Ahuja aka ‘Spewushhhiiiii’ claimed the winner’s title along with the prize money. Ahuja defeated ‘kracker’ in heads-up sending him to the runner-up position.

By the time the competition reached Level 53, Ahuja amassed 11 million chips up against ‘kracker’ with 2.68 million chips. Ahuja and his opponent put their entire stack in the middle with Q♥ 3♥ and A♦ 7♥, respectively in the final hand. The board immediately opened Q♣ 3♣ J♣ 6♣ Q♠ and that’s when Ahuja knocked out ‘kracker’ with his full house QQQ33. The winner has been making deep runs this year and is also recorded to have triumphed the 2020 BPT 10k Kick Off event.

A total of 265 runners registered for INR 4,500 in Hitman INR 7.5 Lakhs GTD on Adda52 last night. The tournament that began at 8 pm continued until 2:31 am and eventually saw Gurpal Singh aka ‘gurpal83’ emerging victorious and adding INR 2.20 Lakhs in prize money along with 12 bounties on his way. He railed out Amit Jangir aka ‘Newcomer’ in heads-up who secured INR 1.31 Lakhs for ending in the runner-up position.

The flagship event on PokerStars’ Tuesday schedule was Sixth Sense INR 6 Lakhs GTD that crossed its guarantee to become INR 6.37 Lakhs after gathering 255 entries. Online reg ‘Wabi-$abi’ topped the field as the players struck a heads-up deal which saw ‘modi chai wala’ in the runner-up position. ‘Wabi-$abi’ pocketed INR 1.07 Lakhs while the latter managed to walk home with INR 92,945.

Harsh Bubna aka ‘harsh1327’ (3rd), Sarthak Jain aka ‘Sarthakjain’ (6th), Nitin Ranka aka ‘ElMonje’ (9th) ended in the money. For mroe updates on daily winners and other poker tournament taking place around the world, keep reading GutshotMagazine.com and stay tuned!