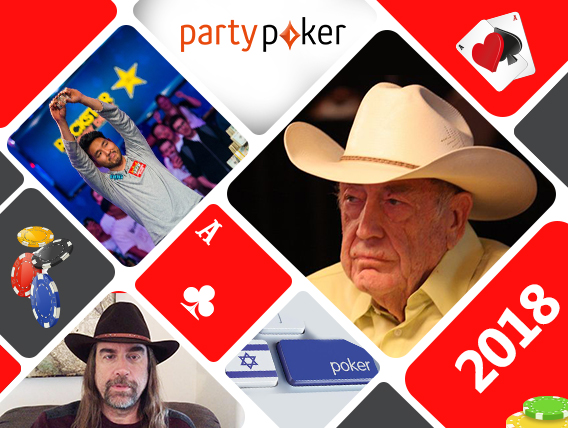 
After Part 1 of the Top 20 international gaming articles of 2018, we’ve made a list of the most significant gaming events that took place in the second half of 2018. Some of the headlines listed here are unique and have never happened in the entire history of this game.

In April 2011, the US government decided to indict the founders of three giants of the poker world – PokerStars, Full Tilt Poker and Absolute Poker on charges of bank fraud, money laundering and illegal gambling. Hundreds of bank accounts and their payment processors as well as five internet domains had also been issued restraining orders. This incident was immortalized as ‘Black Friday’, a dark moment in poker’s history. Among the companies indicted, Full Tilt Poker was a company founded by a well-known US poker pro Chris Ferguson. In late May this year, Ferguson made a public apology for the shameful incident that happened over 7 years ago. He posted a video on the internet stating that he regretted not being able to prevent Black Friday from happening and even said that he has been working tirelessly to ensure players were paid back their money over the years. Celebrity pro Daniel Negreanu later took to twitter to express his disappointment for such a late apology.

June 2018 saw the poker legend and two-time World Series of Poker (WSOP) Main Event champion Doyle Brunson retiring after playing professionally for over 50 years. The 85-year old played his last hands at the 2018 WSOP in Las Vegas. He even cashed there for 6th place and $43,963. Brunson has a total of 10 WSOP bracelets to his name and as of today, his tournament winnings exceed $6.1 million. Two Texas Hold’em hands are even named after him. The ten-deuce card bears his name because he won the NLHE at WSOP two years in a row with a ten and a two (1976,1977) and completing a full house in both. The other hand known by his name is Ace-Queen of any suit, because in his book Super/System he says that he ‘never plays this hand’.

In 2014, well-known poker pro Phil Ivey won a WSOP bracelet, bagging the $1,500 8-Game title. He later showed up for Aussie Millions next January to collect the 1st place seven-figure cash prize in the AUD 250,000 Challenge. After that, Ivey virtually became a ghost and was out of the spotlight in poker for a long while, majorl due to his long-running court case with Borgata. In May this year, he came back with a bang and shipped the Triton Poker SHR series Short Deck for $604,992. Subsequently, he finished 3rd in Shory Deck Ante Only 1M event at the same Triton series for a staggering $1,666,480.

In July, WSOP announced that  two highly accomplished poker pros John Hennigan and Mori Eskandani were inducted into the Poker Hall of Fame of 2018. Hennigan is often the toughest opposition at the table, with even Daniel Negreanu calling him the toughest opponent he has ever faced. Hennigan earned the nickname ‘World’ from his peers since his willingness to bet on virtually anything in the world. He has earned five WSOP bracelets and one WPT championship till now and has upwards of $8 million in live earnings. Eskandani is the creator of many highly popular shows like Poker After Dark, High Stakes Poker, The National Heads-up Championship, among others. He played an instrumental role in bringing this game to TV. He founded his production company Poker Productions back in 2003. The highly appreciated hole-card camera wasn’t something he innovated, but he made such a high use of it that it quickly became an accepted thing in all poker TV shows. He is now the producer of ESPN’s WSOP coverage.

The most anticipated poker event of every year is the WSOP Main Event held in Las Vegas. The 2018 WSOP saw it being conducted for the 49th time since 1970. This year’s WSOP Main Event champion was American pro John Cynn. Hailing from Illinois, Cynn bagged the WSOP title, the elusive WSOP bracelet and 1st place cash prize of $8.8 million. He had previously finished 11th in the Main Event of 2016 WSOP, earning a hefty pay-check of $650K there too. After his milestone win, he commented, “Last time when I got knocked out in 11th I was really happy. This time around was, in a word, ‘Different’. Really, neither is supposed to happen, right? To make 11th is insane on its own. And then to win, that’s literally something that you dream of, but just never expect to happen. Right now, I do feel pretty overwhelmed. All the emotions times 10.” His total live earnings were multiplied by nearly 10 times after this staggering win.

16) Justin Bonomo wins Big One for One Drop

In Part 1 of this list, we mentioned Justin Bonomo completing a double for winning the Super High Roller Bowl 2018 in Las Vegas after winning the SHR Bowl China in March earlier. In July this year, he made a giant leap in his career and shipped Guy Laliberté’s Big One for One Drop for $10 million. With this achievement, he quickly became the number one player to rank on Worldwide All Time Money List, beating Negreanu’s earnings by a significant margin. Some might term him as the luckiest person to exist in 2018, but only real poker aficionados know how difficult it is to achieve that kind of a record if you don’t have the enormous experience and dedication, that Bonomo has proved to possess, for this skill-based game. He earned $25 million in live poker in 2018.

17) Israel close to recognizing poker as a game of skill

The middle-eastern country of Israel witnessed a welcome development in November this year. The Knesset, the unicameral legislature of Israel, saw one of its members Sharren Haskel introduce a new bill to permit and regulate poker tournaments in the country. The bill also includes the recognition of poker as a skill-based game, as opposed to luck-based. The bill, if passed, proposes to regulate the Israeli Poker Players Association, which will then have complete control over hosting national and international poker tournaments and leagues within the country. Haskel commented on this news saying, “Israeli sportsmen bring respect and pride to the state in international competitions. Now that the Supreme Court has ruled that poker players are sportsmen and not gamblers, they should be permitted to practice on their home turf.”

partypoker, one of the giants of the worldwide poker scene, hosted a tournament called MILLIONS Online this December on their ever-popular platform. The tournament had a jaw-dropping guarantee of $20 million and saw a total of 4,367 entries for the event, which shattered the original guarantee and made it to $21,835,000. Portugal’s Manuel ‘Sheparentao’ Ruivo and Pim ‘ForMatherRussia’ de Goede made a heads-up deal which saw Ruivo take a slightly higher prize of $2,329,944 than de Goede’s $2,309,995. The previous record in this regard was held by PokerStars when it hosted the Sunday Million itds its 10th anniversary back in late-2011. This event had attracted 62,000 players from around the world and created a prize pool of $12.4 million.

In May this year, Gordon Vayo, a well-known American poker pro, had sued the poker giant PokerStars for not paying him $692,000 that he won for shipping an event in May 2017 Spring Championship of Online Poker (SCOOP) series. PokerStars had alleged that Vayo was using a VPN to show that he was playing from out of USA (PokerStars does not have an online operating license here), but instead he was playing out of his own house in California. Vayo had dragged PokerStars in Californian Court on counts of fraud, breach of contract, unlawful activities and false advertising. PokerStars in turn had sued him for wasting their $280,000 on legal work. In December, PokerStars withdrew this case against Vayo and buried the hatchet that was unnecessarily being dragged on for such a long time.

The last major international headline of this year was Isaac Haxton winning the ultra high-stakes Super High Roller Bowl (SHRB) V. The fifth edition of SHRB ran between 17-19 December 2018 at the same venue of ARIA, Las Vegas. The event had a staggering buy-in of $300,000 and attracted only the best of the best. USA’s Haxton walked away with $3,672,000 as 1st place cash prize which took his live earnings past $23.5 million. Previous SHRB winners include Justin Bonomo (2018), Christoph Vogelsang, (2017), Rainer Kempe (2016) and Brian Rast (2015). The event also saw Daniel Negreanu making a highly impressive fold against his opponent. Negreanu did a sick read and folded his nut straight against his opponent’s full house. But that’s just Negreanu.

With this, we come to the end of our top 20 international stories of 2018. The industry saw such upheavals that it can easily rank in the top of this decade’s most significant poker history year. Next year is also expected to be packed with huge tournaments and the incomplete events of 2018 like Israel being a hair-length away from recognizing poker as a skill-based game will hopefully reach its happy climax in 2019.

Keep reading GutshotMagazine.com for similar news as well as general poker news from around the world.