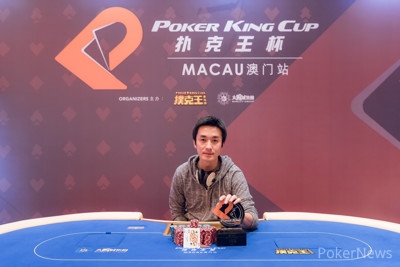 
All attention is currently focussed on the Poker King Cup which has been scheduled between 20-25 September at a time where a lot of live poker is taking place in Asia. The APT Philippines Championships is underway, the WPT Korea is underway and this series at the Venetian Macau is also underway.

One of the first tournaments to kick off here in Macau was the HKD 80,000 High Roller and players from around the world were part of it, while the player to walk away with top honours was Japan’s Tokuho Yoshinaga. He beat a field of 69 entries which was more than double last year’s participation – 34 entries.

In heads-up, Yoshinaga beat his countryman Takashi Ogura and walked away with the top prize of HKD 1,410,169 (~$180,472), which turned out to be the highest live cash of his career by a long way. However, a heads-up deal meant that Ogura wasn’t too far behind, winning HKD 1,323,831 himself.

Only the top 10 players were eventually paid out a minimum cash of HKD 158,300 in this tournament, with players from four different countries making the money and popular Spanish pro Sergio Aido missed the cut. However, he will want to do better in the Main Event which was already kicked off in Macau.

Keep reading GutshotMagazine.com for more updates on the Poker King Cup in Macau as well as other biggest poker tournaments from around the world.