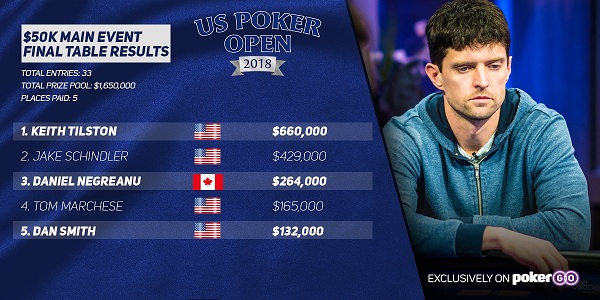 
Let’s start off with news that came out first – Stephen Chidwick Wins the US Poker Open Championship. How, you wonder? The main and final event of the USPO began and after registrations closed on Day 1, a total of 33 entries were recorded. With the buy-in being $50,000, the total prizepool went up to $1,650,000.

Prizes were calculated and the player who would eventually win the Main Event would receive an amount of $660,000, which would still be short of Stephen Chidwick’s $1,256,600 at the top of the standings. He was announced the winner at the end of Day 1 of the Main Event. Coming to the Main Event, it was USA’s Keith Tilston who shipped the tournament, for $660,000 (~INR 4.24 crore).

Tilston has been around the live poker circuit for well over a decade but hasn’t been a very frequent player. However, he finished in the money in 4 out of the 8 events held at the inaugural US Poker Open, grossing over $1 million, and taking his career live earnings past the $2 million mark. This Main Event win of $660k also became his highest ever live cash!

He may have not been too well known before this series, but Tilston will certainly walk away from this tournament as a more respected poker player, having beaten the likes of Daniel Negreanu, Dan Smith and others on the final table. With Negreanu busting in 3rd place, Tilston faced Jake Schindler in heads up, who had over $15 million in live poker earnings.

The heads-up battle was a long one, but it finally ended when Tilston held a nut flush draw, with Kh-4h while Schindler had a straight draw, with 8s-7h as the board opened Ah-9h-6s. The turn and river opened 2c-2h, Schindler bluffed and went all in but Tilston called his bluff and won the hand, making him the Main Event champion!

Tilston overtook Schindler to take 2nd place on the USPO Championship standings but was short of Chidwick at the top, who was crowned champion of the inaugural US Poker Open. Final standings: 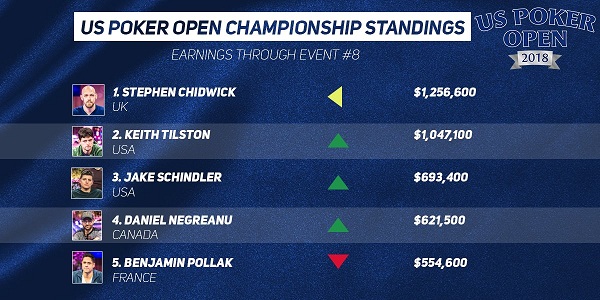 That puts a wrap on proceedings at the USPO, but you can keep following GutshotMagazine.com for news on other big poker tournaments from around the world!