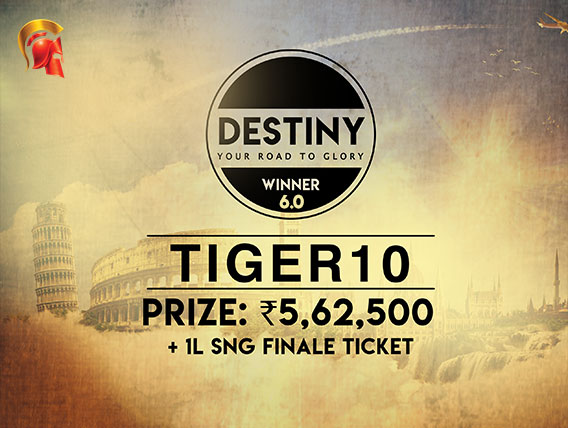 
Destiny is one of The Spartan Poker’s most popular tournament offerings, as it allows users to be a part of the massive INR 25 lakh prize pool each Wednesday, plus a chance to win an international poker trip. In the current Destiny 6.0 series, players are playing for an INR 10 lakh package trip to play poker at a prestigious festival in Europe.

Destiny 6.0 INR 25 Lakh GTD kicked off at its usual scheduled time of 7:30pm last evening and it wasn’t until 3:56am this morning that a winner was declared, meaning a grind of over 8 hours. However, for those finishing among the top prizes, it would’ve certainly been worth the effort.

The INR 5,500 investment on buy-in proved to be extremely profitable for one person in particular and that is ‘Tiger10’, who has been among many victories on Spartan so far. The player beat the field of 465 entries to win a massive first place prize of INR 6,62,500, from where INR 1 lakh will be deducted for his entry towards the Destiny 6.0 SnG Finale.

40 places were paid out a minimum cash of INR 15,000 but Tiger10’s prize was much higher than everyone else. In the past, Tiger10 has taken down several Spartan featured tournaments including the Triple Bubble and the Mega Freeze in August, followed by shipping Daredevil in September.

Playing from the FTRPoker platform, Tiger10 made another big addition to his poker bankroll. Currently focussing on his education, he preferred to stay anonymous but has plans of revealing himself after his studies are done. Till then, it’s just suspense for everyone. When Gutshot spoke to the player, however, he gave us some insights on the tournament.

He said, “I just registered like 20 mins before registration ended and got a double up. Then, till the end, I was at the bottom but when 5-6 people were left I became really aggressive and it paid off. It’s a special win because there were a few very good regulars and I somehow managed to win it, so I am happy overall with my performance and looking forward to the SnG Finale.” He also added, “Thank you for featuring me on Gutshot Magazine once again.”

Also, on the Final Table were many top pros like Akshay Nasa aka ‘sherlock52’ and Anirban Das aka ‘pokernoob’, so it was a good effort from Tiger10. He now becomes the 9th person to reach the Finale; one more winner before they battle it out for the trip to Europe. Keep reading GutshotMagazine.com for more updates on India’s top poker tournaments and promotions.