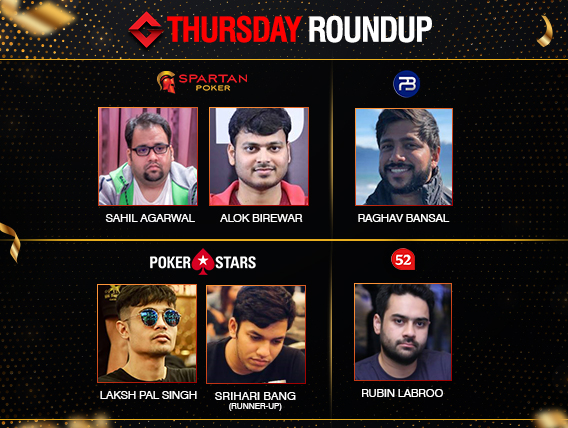 
An incredible night across the major poker sites of the country that experienced a surge of players because the guarantees shoot up assuring even greater prize pools. One of the biggest tournaments to take place last night was Super High Roller INR 55 Lakhs GTD on Spartan Poker. Other marquee events also wrapped up successfully and prominent names in the industry clinched to the winner’s title. Here is a complete summary of Thursday night…

Spartan Poker’s Thursday tourney Ultron INR 22 Lakhs GTD logged in 711 entrants out of which the top 63 places earned a payout for their efforts from the bigger prize pool of INR 28.44 Lakhs. It was an anonymous player ‘Aarnav’ who defeated ‘masterbluffs’ in heads-up to secure the first-place prize money along with the valuable title.

A part of the ongoing SSS on Spartan Poker, the Super High Roller INR 55 Lakhs GTD was the major attraction last night. A total of 176 players entered as the buy-in to this was INR 55,000 and the entire tournament collected INR 88 Lakhs in prize pool which was benefitted by the top 20 finishers who earned INR 1.17 Lakhs as min-cash. The biggest winner of the day was 17 in India’s all-time money list, the Red Dragon Manila Kickoff Event 2020 champ Sahil Agarwal aka ‘Variance’ who secured a 7-digit figure after defeating Vaibhav Sharma aka ‘Nikka Zaildar’ in heads-up.

The poker fanatics kept flocking to and fro as Spartan Poker offered a variety of tournaments yesterday. At 9:30 pm, another feature named Big Bounty INR 7 Lakhs GTD commenced, fetching a total of 261 entrants after paying a fixed buy-in of INR 3,300. Capturing the first-place prize money was Alok Birewar aka ‘Mazacar’ who railed out Archit Khandelwal aka  ‘rocketarchie’ in heads-up and boosted his poker bankroll.

PokerBaazi’s The Summit INR 15 Lakhs GTD pulled out a total of 304 runners for INR 8,250. This number led to the collection of INR 22.80 Lakhs in prize pool and the top 36 finishers ended up earning from the same. The tournament ended at 3:46 am and it was a well-known figure Raghav Bansal aka ‘thatssosick’ to come out on top after beating Kartik Ved aka ‘TheInternetKid’ in heads-up to bag a hefty INR 5.03 Lakhs in prize money. Ved settled in the second place for INR 3.53 Lakhs followed by Arsh Grover aka ‘Button_Hai_Bro’ in the third position for INR 2.27 Lakhs.

Laksh Pal Singh was announced the official winner in PokerStars’ Highroller INR 15 Lakhs GTD after the players settled for a heads-up deal that saw circuit reg Srihari Bang aka ‘bangbang1999’ in the runner-up position. The entire tournament was joined by 267 entrants who pounced on the field after paying INR 7,700, individually. Out of this number the top 47 finisher took home a share from the final prize pool but Singh seized INR 3.21 Lakhs in first-place prize money and Bang added INR 2.96 Lakhs for the runner-up position.