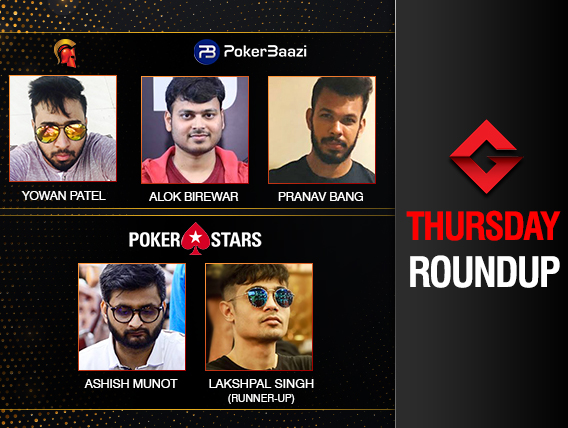 
Thursday night springs up with incredible prize pools! Once again, the prominent platforms gave way to marvelous opportunities for the players out there looking forward to showcasing their skills. Spartan Ultron arrived with the highest guarantee INR 25 Lakhs followed by The Summit on PokerBaazi displaying INR 15 Lakhs GTD and many more to the list! And here is a complete summary of Thursday majors…

Event #39 Ultron INR 25 Lakhs GTD was a part of the popular IOPC series hosted on Spartan Poker. Recording a field of 816 entries crushed the promised amount after each player chipped in INR 4,400. This led to the eventual creation of INR 32.64 Lakhs prize pool which was well-distributed among the top 71 places. At 4:03, when the dust had settled, it was Yowan Patel aka ‘PAPITO’ to conquer the massive field and ship the IOPC title. Patel eliminated ‘GODSENT’ in heads-up to the second place.

Dominating a field of 279 entries on PokerBaazi’s The Summit INR 15 Lakhs GTD was Alok Birewar. The ample number of runners who paid a fixed buy-in of INR 8,250 smashed the guarantee to create INR 20.92 in the prize pool. Birewar aka ‘TheProfessional’ grabbed the largest portion of the same after pushing away Pranay Chawla aka ‘setmeup’ to the runner-up position and seized INR 4.62 Lakhs in prize money.

Another attraction on PokerBaazi last night was Thursday MonsterStack INR 5 Lakhs GTD pulling out a total of 218 entrants for a buy-in of INR 2,750. The grinding continued for over 4 hours and Pranav Bang aka ‘pranav.bang1’ emerged triumphant securing INR 1.28 Lakh in prize money after railing out Aditya Kulkarni aka ‘adit11’ in the heads-up play who eventually settled for INR 89,979.

The guarantee crossed to create a higher prize pool which was well-received by the top finishers including Devvrat Arya aka ‘flopCheck’ (5th), Ratul Steves aka ‘luna’ (12th), Hitesh Batra aka ‘hiteshbhai’ (14th), Aditya Sushant aka ‘griezmann’ (19th) and other.

PokerStars’ Thursday flagship Highroller INR 10 Lakhs GTD saw the generation of a higher prize pool, and the top 34 places strolled away with their min-cash out 207 contenders. The 6+ hours long haul ended with a heads-up deal, chopping the pot were Ashish Munot aka ‘chipcharity999’, the official winner and Lakshpal Singh aka ‘B00MTilt23’ finishing in the second position, both earning INR 2.47 Lakhs in prize money.

Other notable players to cash include Rubin Labroo aka ‘kornkid4’ (4th), Sahil Mahboobani aka ‘inaboobham’ (9th), Hitesh Batra aka ‘hiteshbhai999’ (11th), Ram Kakkar aka ‘TheLagLawyer’ (12th), Gaurav Sood aka ‘3betPanda’ (29th) Sagar Choudhury aka ‘sagarpupull’ (34th) and so on. For more updates on the top online poker tournaments and winners in India, keep reading GutshotMagazine.com!

Sign-up to PokerSaint using the code “GUT100”. Also, check out our online poker rooms section, where you can read reviews on the biggest and best poker rooms in the country, while also taking advantage of their bonuses and promotions. Check out these top poker rooms HERE