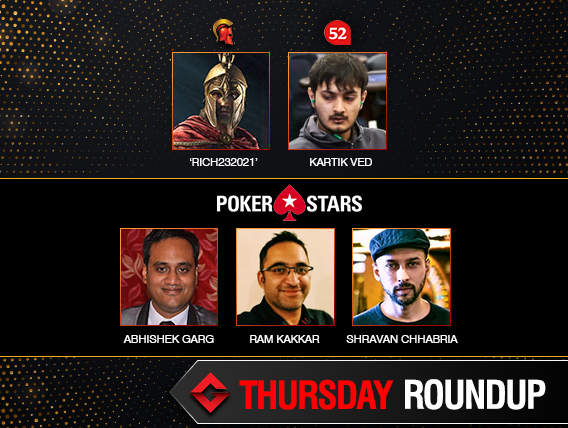 
A thundering Thursday night that came roaring and smashing the guarantees, promising the poker fanatics bigger prize pools! The leading online sites of the country have put before the players some incredible opportunities and with the weekend knocking at the door, the platforms have been assuring bigger bundles of cash prizes. So, let’s take a quick tour of Thursday majors…

Spartan Poker hosted the Thursday flagship tournament Ultron INR 17 Lakhs GTD last night attracting a total number of 518 players and these entrants paid a fixed buy-in of INR 4,400. Eventually, the displayed guarantee was bested, generating a bigger prize pool. And before the tournament came to a standstill, the top 47 places strolled out along with a min-cash. Capturing the winner’s prize money was ‘rich232021’ who seized the title after defeating Ajit Singh Arora aka ‘ace_bob’ in heads-up.

A field of 260 entries was observed with each one chipping in a buy-in of INR 8,250 in The Summit INR 15 Lakhs on PokerBaazi. Dominating this field was ‘Mavrik’ who defeated Goonjan Mall aka ‘gmtesting’ in heads-up to seize the first-place prize money of INR 4.58 Lakhs. However, Mall managed to secure INR 3.21 Lakhs for the runner-up position.

Adda52 hosted its featured tournament Godfather INR 20 Lakhs GTD last night, luring a massive field of 482 entries for a buy-in of INR 5,500. The tournament guarantee was smashed, creating a newer and bigger prize pool of INR 24 Lakhs which was profited by the top 49 places. It was a prominent face in the industry Kartik Ved aka ‘Pegasus1505’ who outlasted the field to boost his poker bankroll. Ved defeated ‘pomfret1989’ in heads-up for INR 5.9 Lakhs and the runner-up secured INR 3.49 Lakhs.

Dominating the field was online crusher Abhishek Garg aka ‘TheGrinder333’ who added another feather to his illustrious poker cap after being announced the official winner on PokerStar’s Highroller INR 10 Lakhs GTD. The competition halted after the players decided to strike a 3-way deal and Garg carrying the largest stack secured the first position. However, all three players were paid out an equal amount of INR 1.69 Lakh. Ram Kakkar aka ‘TheLagLawyer’ settled in the second position followed by Shravan Chhabria aka ‘lukBo$$’ in the third place.

Once again, the tournament guarantee was slightly exceeded, producing a larger prize pool, a slice of which was shared among the top players including Ashish Ahuja aka ‘Spewushhhiiiii’ (4th), Sagar Choudhury aka ‘sagarpupull’ (6th), Goonjan Mall aka ‘gmtesting.ind’ (10th), Kartik Ved aka ‘TheInternetKid’ (13th), Sharad Rao aka ‘sordykrd’ (24th), Shagun Jain aka ‘Sogani22’ (27th) and so on.

Thursday night on 9stacks devoted to Thunder INR 5 Lakhs GTD commencing sharply at 8 pm, pulling out a pretty decent field with each player equally paying a buy-in of INR 4,400. The star of the night was an anonymous player ‘nkv1497’ who added healthy INR 1,41,500 in prize money. He defeated Goonjan Mall aka ‘gmtesting’ in heads-up and the runner-up took home INR 97,500.

The top players finishing in the money include Akash Shekhar aka ‘K9_A’ (3rd), Raj Kumar Gahlot aka ‘Fireman’ (5th), Ankit Abhishek aka ‘yoan’ (8th) and others. From more updates on the top online poker tournaments and winners in India, keep reading GutshotMagazine.com!