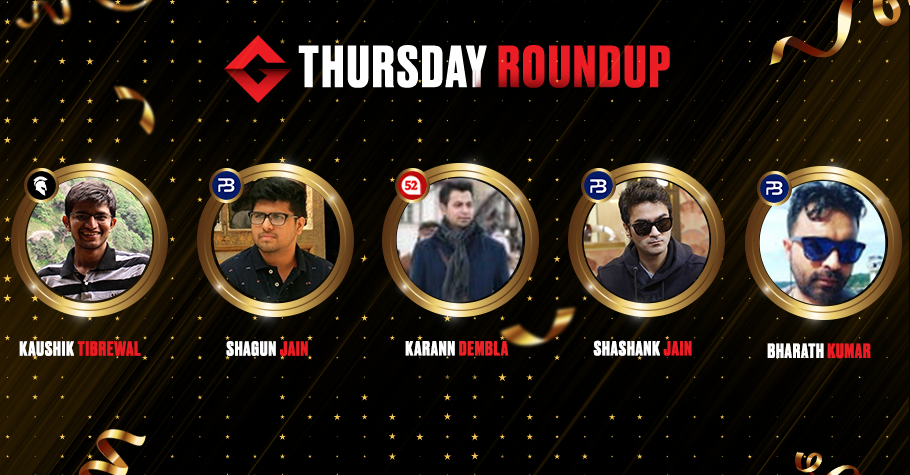 Thursday Round Up: Shashank Jain Steals The Night On Virtual Felts


Thursday night on the virtual felts saw poker pros polishing their poker skills ahead of the big weekend. From Adda52’s staple Godfather tournament to PokerBaazi’s NPS #72 with a ₹1 crore guarantee. Thursday night was indeed an energetic and action-packed affair. Here’s what the night looked like:

The NPS Highroller on PokerBaazi was expected to be a blockbuster as numerous players battled it out in the satellite tournament but only the best 84 could win a ticket to this highroller event. The advertised guarantee of  ₹1 crore was crushed and the final prize pool stood at  ₹1.13 crore. Out of the 84 players, the top 76 were paid out. The min-cash at this highroller was  ₹36,240.

The winner of this tournament was Shashank Jain aka ‘Westworld.’ Jain had a payday of a little over a massive two million rupees (₹20.31 Lakh), making him the biggest winner of the night. The second position was claimed by poker pro Kunal Patni aka ‘VasooliChacha,’ who managed to add ₹14.05 Lakh to his bankroll. The third position was held by mystery player ‘pablo_escobar,’ who took home a pay cheque of a million rupees(₹10.01 Lakh).

Those who got busted without making any money included Shashank Desai (80th) and Rubin Labroo (82nd). Online reg Manish Lakhotia (77th), was also the bubble boy in this tourney.

The NPS #73 Thursday Thunder tourney on PokerBaazi was indeed a thundering affair with a lot of action and thrill. The tournament, which attracted 696 entries, crushed the initial guarantee of ₹40 Lakh to generate a final prize pool of ₹51.2 Lakh. The min-cash of ₹13,050 was paid at this tournament and the top 81 places enjoyed a portion of the prize pool.

PokerBaazi’s NPS #75 Sprint was indeed a sprinting tournament. The Sprint crushed the advertised guarantee of ₹6 Lakh as the final prize pool stood at ₹13.5 Lakh. The tournament attracted 900 entries and paid out a min-cash of ₹2,295. The 108 places were paid out.

The NPS #72 Deepdive at PokerBaazi indeed took a deepdive to surpass the advertised guarantee of ₹5 Lakh and generate a final prize pool of more than double (₹11.91 Lakh).

Anonymous player ‘MAP8989’ claimed the title at this tourney with his two re-entries, and took home ₹2 Lakh in prize winning. Rajat Mahajan aka ‘happyfish’ grabbed the runner-up spot with a paycheque of ₹1.41 Lakh, and mystery player ‘Badimachli’ grabbed the third spot for ₹91,110, which was also the highest five-figure prize amount of the tournament.

Spartan Poker’s Thursday staple Trending Thursday was also a bustling tournament. It attracted 453 entries who generated  a prize pool of ₹23 Lakh. The top 39 places were paid out as the min-cash stood at ₹15,870.

Kaushik Tibrewal aka ‘ikigai’ topped the trending Thursday table by adding the winning prize of ₹4,61,150 to his bankroll. Anonymous player ‘TejuHel’ finished at the runner-up spot for ₹3,06,590. Prakash Gupta aka ‘Robin Van Charsi’ walked out for ₹2,24, 250 at the third spot.

ALSO READ: 6 Skills You Must Develop to Succeed in Online Poker Game

PokerStar’s Highroller was an action-packed tournament. The 162 entries generated a final prize pool of ₹11.34 Lakh, by surpassing the guarantee of ₹10 Lakh. The min-cash paid at this tourney was ₹15,847 and the top 20 places were paid out.

Anirban Das aka ‘nocluewho’ topped the table adding an impressive sum of ₹2,28,621 to his bankroll. Arsh Grover aka ‘BiggggTymeR’ finished second for ₹1,76,892, while Goonjan Mall finished third for ₹1,36,868.

Adda52’s staple and most loved tournament Godfather wasn’t a lowkey affair. With poker pros battling it out for the top spots, only the top 49 places out of the 469 entries could make it in the money. The final prize pool stood at ₹25 Lakh as the min-cash paid was ₹13,750. 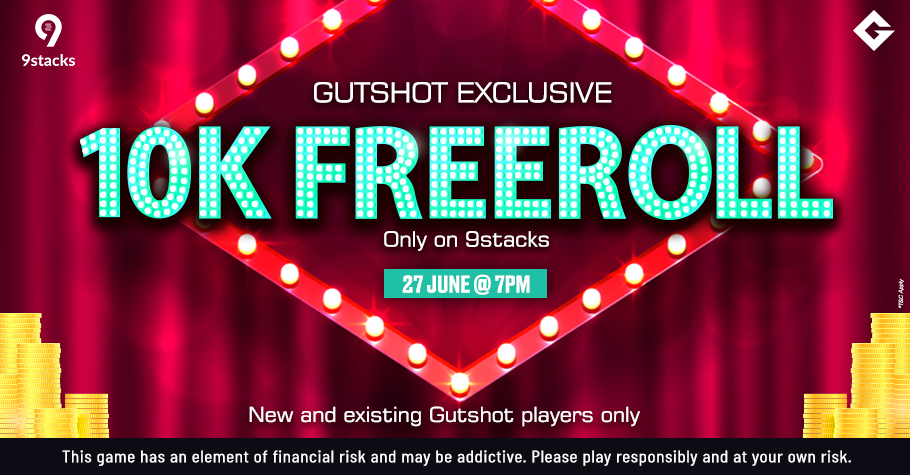