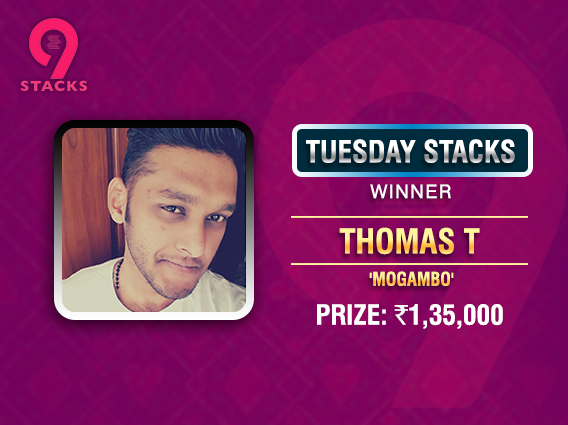 
9Stacks is a well-established online poker platform in India, offering many feature tournaments around the year. Just recently, they launched a new line up of high-stakes daily tournaments on their platform. There will be INR 5 Lakhs GTD feature tournament every day of the week, called the Prime Time @ 8 tournament. Sunday Stacks is also got an upgrade in the guaranteed prize pool.

Yesterday’s Prime Time @ 8 tournament featured the Tuesday Stacks, having a buy-in of INR 3,300 and had INR 5 Lakhs GTD. It began at 8 pm and drew 78 entries, with 41 re-buys made. A total of 15 players were paid out. The champion to emerge from the high value affair was Thomas Thomas aka ‘Mogambo’. He finished 1st with INR 1,35,000 in cash prize.

He beat Atul Khurana in the heads-up, who had to settle for INR 95,000 runners-up cash prize. The 3rd place finisher, Abhishek Garg aka ‘TheGrinder’ cashed out INR 70,000. He has a few wins in poker career in the past, having shipped The Summit just recently on PokerBaazi for INR 3,27,600.

The champion though, Thomas T, is not exactly new to the online poker scene, but this win made him elated beyond words. He quoted an inspirational message when Gutshot got in touch with him after his win, saying, “’10 percent luck, 20 percent skill, 15 percent hard-work, 5 percent pleasure, 50 percent pain’, that’s the best way to quote a poker grinder’s life.”

Talking about the win later, he added, “This may not be the biggest score but I’m sure happy with the win. None of this would have been possible without the support and guidance of my friend and coach Sandeep Varma.

We know what a lakh+ win like this means to a grinder who has put his blood, sweat and tears into the game, burning the midnight oil to play late and many more sacrifices only true poker aficionados will understand. We at Gutshot sure hope this win gives him a sustainable enough bankroll to pursue his love for this beautiful game.