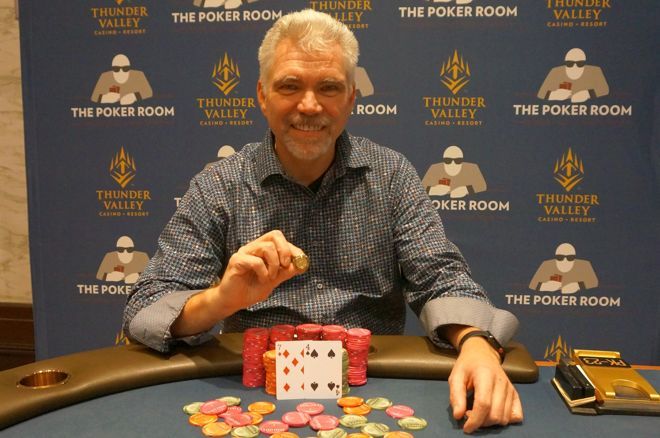 
The world-famous poker brand World Series of Poker or WSOP for short, tours across USA to host its popular WSOP Circuit (WSOPC) tournaments. 2019 began with a bang, whereby they hosted the first stop of the year at Choctaw Casino in Oklahoma. The second WSOPC stop was hosted in Thunder Valley Casino in Sacramento, California, between 10-21 January.

The series saw a total of 13 events hosted and the $1,700 Main Event was 11th in the line-up, starting on 18th January. After 3 days of play and overcoming 608-strong entry field, 57-year old software engineer Thomas Kornechuk shipped the tournament and earned $193,439 (~INR 1.37 Crores), his first gold ring, and a seat into the 2019 Global Casino Championship.

Kornechuk, hailing from Auburn, Washington, started taking poker seriously in recent times. After his win, he said, “I’ve followed a few different coaches. I’ve studied a lot of scenarios with them. I’ve read books about mental preparedness, specifically poker. And I’ve tried to apply that. My game plan was to be conservative as much as possible, and apply pressure when I saw openings to do so. I was looking for a couple of tells that I saw. I attacked those. I think that’s what changed for me.”

Kornechuk defeated California’s Brett Murray in heads-up and denied him his second WOSPC Thunder Valley ME win, having won it previously in September 2018 for $151,145. Kornechuk got off to a good start in 10-max Final Table by eliminating Paul Chai in 10th place who had to settle for $14,443 in prize money. Kornechuk then kicked Paul Camby out at 9th place for $17,943.

Kornechuk wouldn’t eliminate a player again till heads-up. The final hand of the tournament happened at Level 34 with blinds at 100k/200k/30k. The short stack of Murray was shoved pre-flop with 4c 3s. With the eventual champion packing 7d 4h, the board ran 8d 4d 9s 7h 2d making two pairs for him. Murray had to settle for $119,644 as runner-up prize.

Kornechuk has nearly doubled his previous earnings with this win, which is also his biggest live win, and will be looking to convert this significant prize money into more upcoming tournament wins and cashes. Other side-event winners in the series were Adum Dunkle and Stephen Song. Both won a sat into the 2019 Global Casino Championship.

Keep reading GutshotMagazine.com for tournament updates and results from around the world and for your daily dose of general poker news.