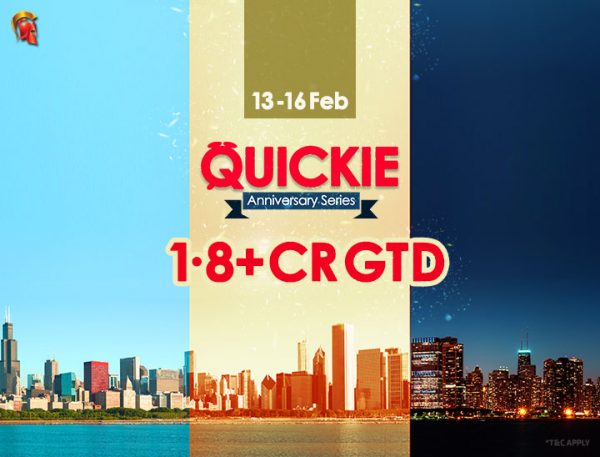 While there used to be four Quickies daily in the past, now there are only three, but they are extremely popular for those players who like to play a rapidly paced tournament. The current daily Quickies at The Spartan Poker are:

This special anniversary series will feature only turbo formats and has 36 tournaments over the course of the 4-day schedule. Apart from the above mentioned 3 quickie tournaments, there will be several other turbo events of different buy-ins across the day.

A total of over INR 1.8 crore in guaranteed prizes will be on offer during the ‘Quickie Anniversary Series’, including INR 7 lakhs in leaderboard prizes. In celebration of the Anniversary ALL Quickie tournaments during the series, will feature twice their respective guarantee amounts! That’s right, so even more value for the same buy-in. There is also a very cool additional top prize which will be given to the leaderboard topper – a Suzuki Intruder motorcycle! This solidly built beast was released late last year and will surely be a head-turner on the streets.

The ‘Quickie Anniversary Series’ will be one of the highlights of the month on The Spartan Poker and you shouldn’t miss out on this opportunity of bringing in some quick profits by winning some turbo tournaments and also a share of the 7 lakh leaderboard prize pool.

Keep an eye on GutshotMagazine.com for more details on the ‘Quickie Anniversary Series’ and the full schedule as well.