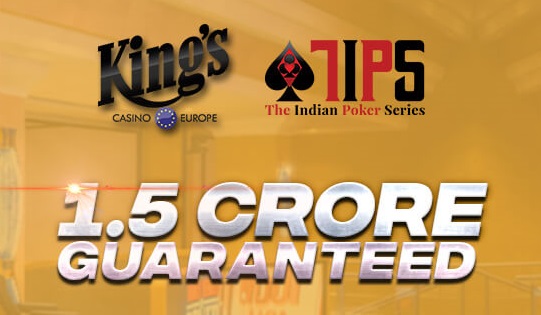 The Indian Poker Series to make debut in Europe


We’re a little over a week away from the launch of a historic poker tournament series in Europe – The Indian Poker Series (TIPS). The series is set to be held in Kings Casino in Rozvadov, Czech Republic, which is the biggest casino in the continent, between 15th and 20th August 2018.

The series was thought of by Indian poker players Jaydeep Dawer and Manish Goenka on one of their trips to the Kings Casino. They realised that Indian players don’t get too many opportunities to play poker in this part of the world, due to budgetary constraints and higher buy-ins across Europe.

The series will be hosted in association with one of India’s largest online poker rooms, PokerBaazi, and the buy-ins to tournaments in this series will be like any other tournament played in Goa and other parts of India. Buy-ins in this series range between €35 and €200, which is extremely low and we’re expecting many Indian pros to be making their first trips to Europe soon.

A total guarantee of €179,000 (~INR 1.5 crore) has been set aside for the entire series and even before the start of the event, planning for TIPS 2 has already begun, with big surprises and bigger guarantees expected. Live satellites to the series were held in Mumbai and Kolkata, while online satellites took place on PokerBaazi.

The series comprises of a total of eight events during these 6 days of action, and Indian players can fit their buy-ins to the entire series within a budget as low as INR 1 lakh. GutshotMagazine.com will be following the action at the inaugural TIPS series, so you can stay tuned for all timely updates from Czech Republic.